“What About Body Piercing?”

In your latest Probe-Alert you had an interesting commentary on tattoos. I was wondering what your thoughts were about earrings, since they also change the body that God gave us. What about body piercing in general?

Earrings are considered a common form of jewelry in the Bible, and there is no condemnation associated with earrings themselves. (Only the desire to adorn oneself with jewelry instead of a beautiful and godly heart, Is. 3 and 1 Pet. 3:3.) In fact, in Ezek. 16 the Lord describes how he treated unfaithful Jerusalem with tenderness and love, dressing her with fine garments and adorning her with all sorts of jewelry, including earrings.

But it’s not just earrings you wonder about, I bet. . . it’s pierced earrings, right? Well, ear piercing is addressed in the Old Testament in a positive way. If a master wants to grant freedom to his servant, “But if the servant declares, ‘I love my master and my wife and children and do not want to go free,’ then his master must take him before the judges. He shall take him to the door or the doorpost and pierce his ear with an awl. Then he will be his servant for life.” (Exo. 21:6)

Personally, I wonder if the Lord didn’t create earlobes just for decoration. . .??! <smile>

The important thing, though, for a New Testament Christian, is that we don’t live under Old Testament rules anyway, and we have freedom in Christ to do anything that He gives us permission to do. Since there is no prohibition anywhere in the Bible against pierced ears and earrings, then one needs to go by other Biblical principles. For instance, if a girl wants to get her ears pierced but her parents say no, then the principle of children obeying their parents would dictate that it would be wrong in this instance.

But apart from ear piercing, there is the subject of body piercing. There is no New Testament prohibition against it, and not even an Old Testament prohibition as far as I can tell. There IS a matter of common sense here, though. For instance, the advice columninst “Dear Abby” published a letter from a dentist not long ago warning people against tongue piercing. He said, “Our mouths weren’t made to work with metal banging around in them,” and that he had quite a number of patients who came in with several broken teeth. Fixing them with crowns is tedious and very expensive, he said, and in his opinion tongue piercing isn’t worth it.

Speaking of which, I have a counselor friend who told me that in the beginning of this fad, someone did a study of those who had pierced their tongues, and discovered that 100% of these young people had been sexually abused. That’s food for thought. (It’s no longer 100%, of course, since now it’s a matter of “fashion.”) 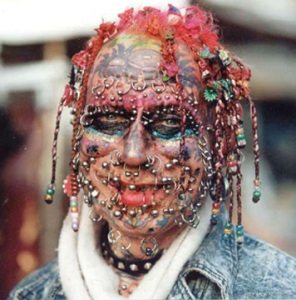