Luke, I Am Not Your Father

One of the greatest movie lines in history is in Star Wars, when the evil Darth Vader reveals the awful truth to our hero Luke Skywalker: “Luke, I am your father.” (Actually, this is a misquote, but it’s become part of our cultural lexicon anyway. Check out this YouTube video of a four-year-old’s priceless reaction to seeing this scene in Star Wars for the first time.) 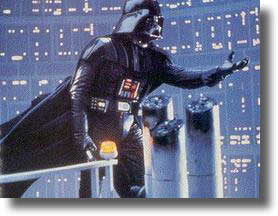 Luke is understandably traumatized by the revelation that the enemy is actually his daddy.

He’s in good company. Millions—probably billions—of people in human history have sustained “father wounds” because their dads were punitive, abusive, evil, distant, judgmental, absent, unsafe, or just disengaged. We live in a fallen world where our relationships are broken, and where hurt people, hurt people. A father’s role is incredibly powerful, both for good and for evil, and every father makes an indelible impression on his children whether he intends to or not.

Children grow up receiving many messages about what a father is like by watching their dads—and boy, do they watch their dads. The only way a boy can learn how to be a man is by watching and copying men, and a father is the closest man to a child. The way a girl learns the value of being female is by watching how her father treats her mother and herself. Children can grow up learning that a father is loving and kind, disciplining from a teaching heart that wants them to grow up to be good adults, a man of integrity and honesty. Many of us were blessed to grow up with just such a dad, and with the “heart template” of a father like that, we can become a parent very much like our wonderful dads—and the generational blessings of a good example are handed down through the years.

This is bad enough, but it gets worse.

God puts children in families where they learn about Him from the way their parents model parenthood. Our concept of “father” is whatever our own dads looked and acted like. Then, when we discover that God reveals Himself as Father in His Word, we paint the face of our heavenly Father with a brush dipped into the bucket of whatever our own fathers were like.

One of my friends shared with me several hurtful stories of the way her dad related to her in judgment throughout her entire life—including the breathtaking condemnation, “If you disappoint me this much, how much more must you disappoint God??” She really struggled with trusting Him. One day I told her, “Sweetie, you don’t know God. He is not a heavenly version of your earthly father. He is who He is. Let’s pray that you will see Him as He really is.” Later, she told me that being told she didn’t know God was the turning point in her relationship with Him, and she started reading the scriptures with an eagerness to find out who He actually is. She started living out Romans 12:2—”be transformed by the renewing of your mind”—and gratefully allowed the Holy Spirit to change the earthly-father filter though which she understood God the Father to be.

One of the kindest things God can tell us is, “Child, I am not your earthly father. I am your heavenly Father. Let Me transform the way you see me through the power of My word.” One of the best places to marinate and meditate is Luke 15. Jesus told all three stories in that chapter to reveal to us the heart of His Father. We are most familiar with the third story, the parable commonly called “The Prodigal Son.” But it’s really about the amazing, grace-filled Father. That story is the best and most accurate filter in the whole Bible for testing our conception of God.

If we see God as vindictive and full of wrath, anxious to blast us with His angry thunderbolts: how does the Father in Luke 15 compare? Where is the judgmental condemnation in that story? It’s not there!

If we see God as distant, unapproachable and uncommunicative, what do we do with the picture of the Father out looking every day for His lost child to return, running to meet him when he finally does?

If we see God as stingy and mean-spirited about His wealth, how does Jesus’ picture of the Father’s generous heart correct our perception?

If Luke Skywalker were real and looking to the Lord, I think he might hear, “Luke, I am NOT your father. I am your Father. Come here and let Me enfold you in My good, loving and safe embrace.”