Kerby Anderson provides various perspectives on the link between Islam and terrorism, including how Americans and Christians can think about its encroachment on our culture.

In this article we will be looking at Islam and terrorism. Before we look at the rise of Muslim terrorism in our world, we need to understand the worldview conflict between Islam and western values. The Muslim religion is a seventh-century religion. Think about that statement for a moment. Most people would not consider Christianity a first century religion. While it began in the first century, it has taken the timeless message of the Bible and communicated it in contemporary ways.

In many ways, Islam is still stuck in the century in which it developed. One of the great questions is whether it will adapt to the modern world. The rise of Muslim terrorism and the desire to implement sharia law illustrate this clash of civilizations.

In the summer of 1993, Samuel Huntington published an article entitled “The Clash of Civilizations?” in the journal Foreign Affairs.{1} Three years later Samuel Huntington published a book using a similar title: The Clash of Civilizations and the Remaking of World Order. It became a bestseller, once again stirring controversy. It seems worthy to revisit his comments and predictions because they have turned out to be remarkably accurate.

His thesis was fairly simple. World history will be marked by conflicts between three principal groups: western universalism, Muslim militancy, and Chinese assertion.

Huntington says that in the post-Cold War world, “Global politics has become multipolar and multicivilizational.”{2} During most of human history, major civilizations were separated from one another and contact was intermittent or nonexistent. Then for over 400 years, the nation states of the West (Britain, France, Spain, Austria, Prussia,  Germany, and the United States) constituted a multipolar international system that interacted, competed, and fought wars with each other. During that same period of time, these nations also expanded, conquered, and colonized nearly every other civilization.

During the Cold War, global politics became bipolar, and the world was divided into three parts. Western democracies led by the United States engaged in ideological, political, economic, and even military competition with communist countries led by the Soviet Union. Much of this conflict occurred in the Third World outside these two camps and was composed mostly of nonaligned nations.

Huntington argued that in the post-Cold War world, the principal actors are still the nation states, but they are influenced by more than just power and wealth. Other factors like cultural preferences, commonalities, and differences are also influential. The most important groupings are not the three blocs of the Cold War, but rather the major world civilizations. Most significant in discussion in this article is the conflict between the Western world and Muslim militancy.

Other Perspectives on Radical Islam

In the previous section, we talked about the thesis by Samuel Huntington that this is a clash of civilizations.

Bernard Lewis sees this conflict as a phase that Islam is currently experiencing in which many Muslim leaders are attempting to resist the influences of the modern world (and in particular the Western world) on their communities and countries. This is what he had to say about Islam and the modern world:

Islam has brought comfort and peace of mind to countless millions of men and women. It has given dignity and meaning to drab and impoverished lives. It has taught people of different races to live in brotherhood and people of different creeds to live side by side in reasonable tolerance. It inspired a great civilization in which others besides Muslims lived creative and useful lives and which, by its achievement, enriched the whole world. But Islam, like other religions, has also known periods when it inspired in some of its followers a mood of hatred and violence. It is our misfortune that part, though by no means all or even most, of the Muslim world is now going through such a period, and that much, though again not all, of that hatred is directed against us.{3}

This does not mean that all Muslims want to engage in jihad warfare against America and the West. But it does mean that there is a growing clash of civilizations.

William Tucker believes that the actual conflict results from what he calls the Muslim intelligensia. He says “that we are not facing a clash of civilizations so much as a conflict with an educated segment of a civilization that produces some very weird, sexually disoriented men. Poverty has nothing to do with it. It is stunning to meet the al Qaeda roster—one highly accomplished scholar after another with advanced degrees in chemistry, biology, medicine, engineering, a large percentage of them educated in the United States.”{4}

His analysis is contrary to the many statements that have been made in the past that poverty breeds terrorism. While it is certainly true that many recruits for jihad come from impoverished situations, it is also true that the leadership comes from those who are well-educated and highly accomplished.

Tucker therefore concludes that we are effectively at war with a Muslim intelligentsia. These are essentially “the same people who brought us the horrors of the French Revolution and 20th century Communism. With their obsession for moral purity and their rational hatred that goes beyond all irrationality, these warrior-intellectuals are wreaking the same havoc in the Middle East as they did in Jacobin France and Mao Tse-tung’s China.”{5}

Anyone else sees the contemporary reality—the genocidal Islamic regime in Sudan; the widespread Muslim theological and emotional support for the killing of a Muslim who converts to another religion; the absence of freedom in Muslim-majority countries; the widespread support for Palestinians who randomly murder Israelis; the primitive state in which women are kept in many Muslim countries; the celebration of death; the honor killings of daughters, and so much else that is terrible in significant parts of the Muslim world—knows that civilized humanity has a newevil to fight.{6}

He argues that just as previous generations had to fight the Nazis and the communists, so this generation has to confront militant Islam. But he also notes something is dramatically different about the present Muslim threat. He says:

Far fewer people believed in Nazism or in communism than believe in Islam generally or in authoritarian Islam specifically. There are one billion Muslims in the world. If just 10 percent believe in the Islam of Hamas, the Taliban, the Sudanese regime, Saudi Arabia, Wahhabism, bin Laden, Islamic Jihad, the Finley Park Mosque in London or Hizbollah—and it is inconceivable that only one of 10 Muslims supports any of these groups’ ideologies—that means a true believing enemy of at least 100 million people.{7}

So, what is the threat in the United States? Let’s take one number and one percentage for an estimate. There are about 4 million Muslim-Americans in the U.S., and we are often told that nearly all are law-abiding citizens. So let’s assume that percentage is even as high as 99 percent. That still leaves one percent who believe in jihad and could pose a threat to America. Multiply one percent by 4 million and you get a number of 40,000 individuals that Homeland Security needs to try to monitor. Even if you use a percentage of one-tenth of one percent, you still get about 4,000 potential terrorists in America.

That is why it is important to understand the potential threat we face from radical Islam.

When the Muslim population increases in a country, there are certain social changes that have been documented. Peter Hammond deals with this in his book, Slavery, Terrorism, & Islam. Most people have never read the book, but many have seen an email on one of the most quoted parts of the book.{8}

Peter Hammond sees a significant change when a Muslim population reaches ten percent (found in many European countries). At that point, he says you begin to see increased levels of violence and lawlessness. You also begin to hear statements of identity and the filing of various grievances.

At twenty to thirty percent, there are examples of hair-trigger rioting and jihad militias. In some countries, you even have church bombings. By forty percent to fifty percent, nations like Bosnia and Lebanon experience widespread massacres and ongoing militia warfare. When at least half the population is Muslim, you begin to see the country persecute infidels and apostates and Sharia law is implemented over all of its citizens.

After eighty percent, you see countries like Iran, Syria, and Nigeria engage in persecution and intimidation as a daily part of life. Sometimes state-run genocide develops in an attempt to purge the country of all infidels. The final goal is “Dar-es-Salaam” (the Islamic House of Peace).

Peter Hammond would probably be the first to say that these are generalizations and there are certainly exceptions to the rule. But the general trends have been validated through history. When the Muslim population is small, it leaders focus on winning converts and working to gain sympathy for Sharia law. But then their numbers increase, the radical Muslims leaders takeover and the Islamic domination begins. 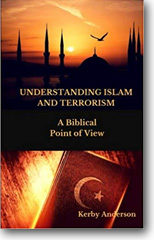 In this article we have been looking at the challenge of Islam when it comes to jihad and terrorist activity. I document all of this in my new book, Understanding Islam and Terrorism. The book not only deals with the threat of terrorism but also takes time to explain the theology behind Islam with helpful suggestions on how to witness to your Muslim friends. You can find more information about my book on the Probe Ministries website.

A foundational practice of Islam is the implementation of Sharia into the legal structure. Sharia is a system of divine law, belief, or practice that is based upon Muslim legal interpretation. It applies to economics, politics, and society.

Sharia law is very different in many respects from the laws established through the U.S. Constitution and the laws established through English Common law. In an attempt to prevent Sharia law from being implemented in America, a number of state legislatures have such bans on Sharia law. Voters in other states have approved a ban that has been struck down by a federal appeals court.

Although opponents argue that these Sharia law bans are unnecessary, various studies have found significant cases of Sharia law being allowed in U.S. courts. One report with the title, “Sharia Law and the American State Courts”{9} found 50 significant cases of Sharia law in U.S. courts just from their small sample of appellate published cases. When they looked at state courts, they found an additional 15 cases in the trial courts and 12 more in the appellate courts. Judges are making decisions deferring to Sharia law even when those decisions conflict with the U.S. Constitution and the various state constitutions.

How should we respond to the increased use of Sharia law in America? One simple way to explain your concern to legislators, family, friends, and neighbors is to remember the numbers 1-8-14. These three numbers stand for the three amendments to the U.S. Constitution that prevent the use of Sharia law.

The Fourteenth Amendment guarantees each citizen equal protection under the Constitution. Sharia law does not treat men and women equally, nor does it treat Muslims and non-Muslims equally. This also violates the Constitution.

These are just a few ways to argue against Sharia law. As Christians, we need discernment to understand the religion of Islam, and boldness to address the topic of radical Islam with biblical convictions.