But I don’t think that’s the way it works.

In Genesis 1, we are told that “God created them male and female” (Genesis 1:27). I think, rather, that there is one spectrum of masculinity and another spectrum of femininity. I also think that God is the one who chooses where on the spectrum babies are born, according to His design and for His pleasure and glory.

I suggest that little girls come into the world at some point on a femininity spectrum. On one end  is the girly-girl who comes out of the womb asking for the little flower headband to wear in the hospital nursery, and she keeps on running toward all things frilly and girly. She loves pink, loves to wear dresses and twirl around to “be pretty,” wants to wear nail polish and makeup just like Mommy (or like the other ladies she sees on TV). 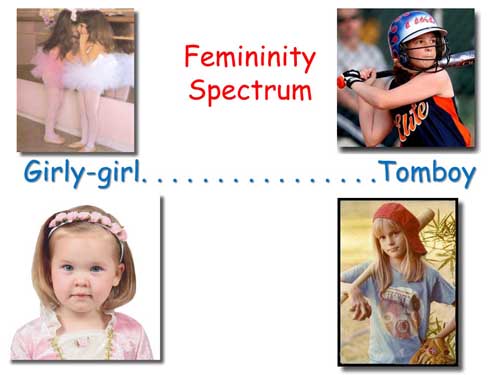 On the other end of the spectrum is the tomboy jockette, who can’t stand wearing dresses, wants to climb trees and play tackle football with the boys. These girls are often gifted athletically and many are natural leaders. When these little girls’ type of femininity is supported and encouraged, they are comfortable in their skin just the way God made them. Wise parents also make sure they wear dresses and “act like a lady” when it’s time to do that—with the promise that when they get home, they can put their jeans or sweats back on and be comfortable.

Sometimes, though, girly-girl types can morph into “mean girls” and inform the jockettes that they’re not good enough as girls, and they can receive the message that it’s not okay to be the kind of girl they are, the kind of girl God chose for them to be because He has a good plan for them. They can grow up not feeling secure in their femininity.

On one end is the rough-and-tumble boy—athletic, noisy, enjoys getting dirty. He bonds to other boys shoulder-to-shoulder, engaging in common activities or tasks, and tends to find face-to-face interaction intimidating. 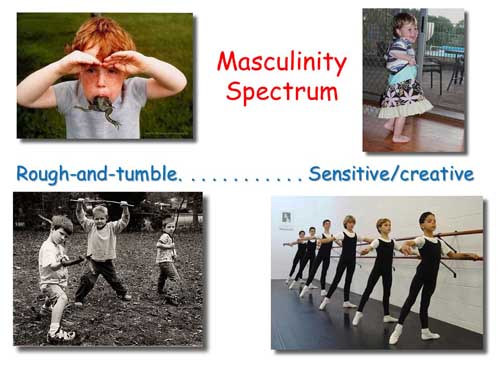 On the other end of the spectrum from the athletic boy is the aesthetic boy: emotionally sensitive, gifted in art, music, theater, dance, or some other kind of art. He usually avoids athletics, getting dirty, and anything having to do with balls coming at him. He bonds eyeball-to-eyeball, connecting to others’ hearts through their eyes the way most girls do, but they are not girls. And then, of course, there is everything in between.

In our culture, we tend to define masculinity in terms of the rough-and-tumble type ONLY, but I don’t think God agrees, since He delights to create so many sensitive boys and those who are a balance between the two. In fact, even as toddlers, they can reveal themselves by responding to another child’s upset by dropping what they’re doing and going over to pat them, soothe them, and attempt to comfort them: “You okay? It’s okay.” This sensitivity is a beautiful thing to behold, but it can get a little boy in trouble. Since we define masculinity so narrowly, it is easy to marginalize and shame the masculinity of the sensitive boy. Especially if his daddy is a rough-and-tumble sort of man who is flummoxed by a little boy who would rather Daddy read to him than throw a football.

If the sensitive boy is affirmed in his type of masculinity, he can grow up to be a phenomenal husband, father, pastor, counselor, artist, musician, dancer—the list goes on. When tomboy girls are loved and accepted by their parents just the way they are, they can grow up to be great moms and teachers and scout leaders, especially of boys.  If, however, they are ostracized for the way they are designed, they can burn with the indignity of being “other than.”

It’s these sensitive, gifted boys that are most at risk for embracing a gay identity, especially when others wound them by slapping false labels on them, even from a young age: gay, queer, homo, fag. Tomboy girls, especially the ones gifted athletically, are quickly tagged with ugly false labels as well: lez, queer, gay. They can easily think, “What do others know that I don’t know? If they say it, it must be true.”

But it’s not true. They’re not gay, they’re gifted. If only they could be helped to see themselves that way!

Our goal as adults should be to help all children grow into gender-secure, emotionally healthy kids who are glad God made them a boy or a girl, and are comfortable in their own skins just the way God made them. I think it starts with affirming the different kinds of masculinity and femininity. It’s ALL good!

This blog post originally appeared at
blogs.bible.org/engage/sue_bohlin/the_gender_spectrum
on January 4, 2011.