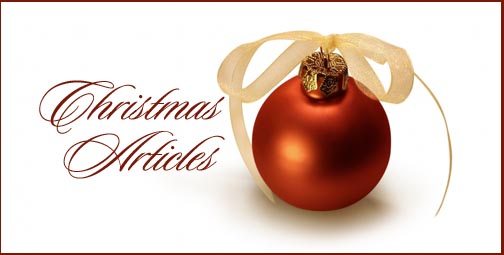 Why the Stories of the Virgin Birth Fit Together [Tom Davis]
Tom Davis answers the charge that the two nativity accounts in the gospels contradict each other, showing how well they complement each other by contributing details from two different perspectives.

A Christmas Quiz [Dale Taliaferro]
A quiz concerning the Christmas story from a biblical perspective.

The Star of Bethlehem [Dr. Ray Bohlin]
What was the Star of Bethlehem? Some people suggest is was an astronomical conjunction of planets and stars. But it might have been the Shekinah Glory, a physical manifestation of God’s presence on earth.

Christmas Film Favorites [Todd Kappelman]
Todd Kappelman highlights some favorite films of the Christmas season, encouraging Christians to enjoy the films while separating the sacred from the secular: A Christmas Carol, Miracle on 34th Street, How the Grinch Stole Christmas, It’s a Wonderful Life, and A Charlie Brown Christmas.

Truth You Can Sing About: Part 3 [Steven Davis]
For the third year in a row, Steven Davis and his son Jon Clive Davis collaborated on a new look at five Christmas carols, accompanied throughout each day’s broadcast by new compositions of each carol.

The Theology of Christmas Carols [Dr. Robert Pyne]
A look at the theology behind five Christmas carols: Come Thou Long Expected Jesus, Hark the Herald Angels Sing, Joy to the World, O Little Town of Bethlehem, and O Holy Night.

Christmas SHINY! [Sue Bohlin]
The visible presence of God in the Old Testament—the Shekinah glory—shows up again at Christmas. No wonder we like shiny, sparkly things that remind us of the glory of heaven!

Is Christmas Necessary? [Jerry Solomon]
Christians have had to respond to the customs of the surrounding culture since the beginning of the church. In the end, though, Christmas is necessary only in terms of its historical and theological content.

Reincarnation: The Christmas Counterfeit [Sue Bohlin]
Sue blogs that Jesus is the only person who had a life before His birth, which we celebrate at Christmas.

Loving God Through Xmas Music? [Sue Bohlin]
Sue Bohlin suggests that believers practice discernment as we listen to Christmas music, putting each song in the right category and allowing each category to point us to Christ.

Why I Won’t Apologize For Watching Hallmark Christmas Movies [Sue Bohlin]
Cultivating a biblical worldview, seeing everything through the lens of creation|fall|redemption, has led Sue to see how the happy endings of Hallmark movies point to the Ultimate Happy Ending in the book of Revelation.

The Christmas Story: Does It Still Matter? [Rusty Wright]
Christmas often means time with family, hectic shopping, parties, cards and gifts. But what about the first Christmas? Why is the original story the baby in a manger, shepherds, wise men, angels important, if at all? The answer may surprise you.

The First Christmas Wreath [Jimmy Williams]
The founder of Probe Ministries examines the role of the wreath in Christmas.

The Great Light [Jimmy Williams]
A short essay on the role of light at Christmas.

The Stable [Jimmy Williams]
Jimmy Williams examines the symbolic and prophetic role of the stable in Christmas.

Are You Listening? Do You Hear What I Hear? [Rusty Wright]
Have you ever missed a great opportunity because you weren’t listening carefully? Twenty centuries ago some clues to impending good news of monumental import eluded most folks. Fascinating prophecies of Jesus’ birth and life bring revealing insights into your own life today.

A sure sign of the approaching Christmas Season is the appearance of brightly colored wreaths which adorn the front doors of countless dwellings around the world. These gaily decorated reminders get us ready to commemorate again the wondrous birth of Christ our Savior.

Christmas is a time of warmth and celebration. A blazing fireplace, the smell of pine, a brightly lit tree with gifts spilling out in every direction, the sense of families drawing closer, shining smiles of eager youngsters–these and a myriad of other personal touches and traditions make this a most special time of the year.

But ironically, this joyous season becomes also a time of stress and dread for many. Stress and dread caused by endless traffic and irritating crowds, financial tensions, anxiety in the choice and cost of gifts for others, fractured families who shuttle children back and forth and spend more time awkwardly carving up a schedule than they do the turkey, Rolaids and ruined toys, traffic deaths and body counts, loneliness, alienation, depression, and fatigue.

Such is the bitter/sweet nature of Christmas. And yet these very feelings of lostness and despair are what Christmas is really all about. Because its celebration flows out of divine consolation. Little Immanuel has come to identify Himself with a fallen humanity. To share our pain and give us hope.

He was a man of sorrows, acquainted with grief. . . . As a teenager He experienced the death of Joseph, His human father. As eldest son He knew backbreaking labor and the weight of the responsibility to provide for His household. His ministry and mission were misunderstood by His loved ones. He faced the humiliating accusation of illegitimacy all of His life. And accepted His betrayal by a friend. He patiently bore the hostility and the taunts of His enemies, and also the injustice of being wrongly accused. He humbly submitted to arrest, torture, and the cruelest of deaths. He died of a broken heart.

“Sure He has borne our griefs and carried our sorrows,” says the Prophet Isaiah. “We do not have a high priest who cannot sympathize with our weakness, but one who has been tested in all ways as we are,” notes the writer of the book of Hebrews. He understands. He lived as we live. He died and rose again that we might really live. Christmas, then, is a celebration of life for God’s people, a time of triumphant rejoicing and praise. We can wholeheartedly do so because our Savior has come. His suffering has brought freedom and hope to us all.

Why can we celebrate each year with the Christmas wreath? Because He wore the first one–a crown of thorns.