We live in a world that has dramatically changed its view of truth. What is the impact of the worldview of postmodernism and the ethical system of relativism in our society and inside the church?

We live in a world that has dramatically changed its view of truth, and thus have inherited an ethical system that denies the existence of truth. The worldview of the twenty-first century is postmodernism, and the dominant ethical system of the last two centuries has been relativism.

Their three different views of balls and strikes correspond with three different views of truth. The first is what we might call premodernism. This is a God-centered view of the universe that believes in divine revelation. Most of the ancient world had this view of true and believed that truth is absolute (“I call ‘em the way they are”). By the time of the Enlightenment, Western culture was moving into a time of modernism. This view was influenced by the scientific revolution, and began to reject a belief in God. In this period, truth is relative (“I call ‘em the way I see ‘em”). Today we live in what many call postmodernism. In this view, there is a complete loss of hope for truth. Truth is not discovered; truth is created (“they ain’t nothing until I call them”).

Postmodernism is built upon the belief that truth doesn’t exist except as the individual wants it to exist. Truth isn’t objective or absolute. Truth is personal and relative. Postmodernism isn’t really a set of doctrines or truth claims. It is a completely new way of dealing with the world of ideas. It has had a profound influence in nearly every academic area: literature, history, politics, education, law, sociology, linguistics, even the sciences.

Postmodernism may seem tolerant, but in many ways it is not. For example, postmodernists tend to be skeptical of people (e.g., Christians) who claim to know truth. Now that doesn’t mean that it is hostile to religion or spirituality. Postmodernists have no problem with religion unless it makes certain claims about its religion.

Postmodernists tolerate religion as long is it makes no claim to universal truth and has no authority. But they are very critical of those who believe there is one truth or an absolute truth. They are also critical of Christian missionaries because they believe they are “destroyers of culture.” This is reminiscent of the TV show “Star Trek” that had “The Prime Directive” which prohibited those on the star ship from interfering with any culture. The assumption was that each culture must decide what is true for itself.

Related to this idea of cultural relativism is the belief in religious pluralism. This is the belief that every religion is true. While it is proper to show respect for people of different religious faiths, it is incorrect to assume that all religions are true.

Various religions and religious groups make competing truth claims, so they cannot all be true. For example, God is either personal or God is impersonal. If God is personal then Judaism, Christianity, and Islam could be true. But the eastern religions (Hinduism and Buddhism) are false. Either Jesus is the Messiah or He is not. If He is the Messiah then Christianity is true, and Judaism is false.

Religious pluralism essentially violates the “Law of Non-contradiction.” This law states that A and the opposite of A cannot both be true (at the same time in the same way). You cannot have square circles. And you cannot have competing and contradictory religious truth claims all be true at the same time.

Jesus made this very clear in John 14:6 when He said, “I am the way, and the truth, and the life; no one comes to the Father but through Me.” Jesus taught that salvation was through Him and no one else. This contradicts other religions.

Postmodernism has also changed the highest value in society. We used to live in a society that believed in “Truth” (with a capital T). This has now been replaced by a new word with a capital T. And that is the word “Tolerance.” We are told to tolerate every view and value. Essentially, all moral questions can be summed up with the phrase: Who are you to say?

The worldview of postmodernism provides the foundation for moral relativism. Although a view of ethics as relative began in the era of modernism, it has reached full bloom in the era of postmodernism. If there is no absolute truth, then there is no absolute standard for ethical behavior. And if truth is merely personal preference, then certainly ethics is personal and situational.

Moral relativism is the belief that morality is relative to the person. In other words, there is no set of rules that universally applies to everyone. In a sense, moral relativism can be summed up with the phrase: “It all depends.” Is murder always wrong? Relativists would say, “It depends on the circumstances.” Is adultery wrong? They would say, “It just depends on whether you are caught.” 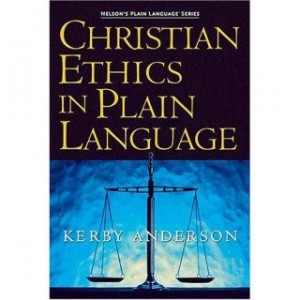 There are two other problems with moral relativism. First, one cannot critique morality from the outside. In my book Christian Ethics in Plain Language, I point out the problem with cultural relativism.{2} If ethics are relative to each culture, then anyone outside the culture loses the right to critique it. Essentially that was the argument of the Nazi leaders during the Nuremberg Trials. What right do you have to criticize what we did within Nazi Germany? We had our own system of morality. Fortunately, the judges and Western society rejected such a notion.

Second, one cannot critique morality from the inside. Cultural relativism leaves no place for social reformers. The abolition movement, the suffrage movement, and the civil rights movement are all examples of social movements that ran counter to the social circumstances of the culture. Reformers like William Wilberforce or Martin Luther King Jr. stood up in the midst of society and pointed out immoral practices and called society to a moral solution. Abolishing slavery and fighting for civil rights were good things even if they were opposed by many people within society.

Some people think stealing is perfectly moral, at least in certain circumstances. Some people think murder can be justified. Society simply cannot allow everyone to do what they think is right in their own eyes.

Obviously, society allows a certain amount of moral anarchy when there is no threat to life, liberty, or property. Each year when I go to the state fair, I see lots of anarchy when I watch the people using the bumper cars. In that situation, we allow people to “do their own thing.” But if those same people started acting like that on the highway, we simply could not allow them to “do their own thing.” There is a threat to life, liberty, and property.

Moral relativism may sound nice and tolerant and liberating. But if ever implemented at a societal level, it would be dangerous. We simply cannot allow total moral anarchy without reverting to barbarism. That is the consequence of living in a world that has changed its view of truth and established an ethical system that denies the existence of truth.

What has been the impact of a loss of truth in society? There are many ways to measure this, and many ministries and organizations have done just that.

Each year the Nehemiah Institute gives the PEERS test to thousands of teenagers and adults. They have administered this test since 1988. The PEERS test measures understanding in five categories: Politics, Economics, Education, Religion, and Social Issues.{3} It consists of a series of statements carefully structured to identify a person’s worldview in those five categories.

Take this question from the PEERS test as an example: “Moral values are subjective and personal. They are the right of each individual. Individuals should be allowed to conduct life as they choose as long as it does not interfere with the lives of others.” The Nehemiah Institute found that seventy-five percent of youth agreed with this statement.

Let’s also consider the work of George Barna. He conducted a national survey of adults and concluded that only four percent of adults have a biblical worldview as the basis of their decision-making. The survey also discovered that nine percent of born again Christians have such a perspective on life.{4} And when you look at the questions, you can see that what is defined as a biblical worldview is really just basic Christian doctrine.

George Barna has also found that a minority of born again adults (forty-four percent) and an even smaller proportion of born again teenagers (nine percent) are certain of the existence of absolute moral truth.{5}

By a three-to-one margin, adults say truth is always relative to the person and their situation. This perspective is even more lopsided among teenagers who overwhelmingly believe moral truth depends on the circumstances.{6}

Back in 1994, the Barna Research Group conducted a survey of churched youth for Josh McDowell. Now remember, we are talking about young people who regularly attend church. They found that of these churched youth, fifty-seven percent could not say that an objective standard of truth exists. They also found that eighty-five percent of these same churched youth reason that “just because it’s wrong for you doesn’t mean its wrong for me.”

George Barna says that the younger generation tends to be composed of non-linear thinkers. In other words, they often cut and paste their beliefs and values from a variety of sources, even if they are contradictory.

More to the point, they hold these contradictory ideas because they do not have a firm belief in absolute truth. If truth is personal and not objective, then there is no right decision and each person should do what is right for him or her.

What is a biblical perspective on postmodernism? One of the problems with the postmodern worldview is that it affects the way we read the Bible.

Because of the popularity of postmodernism, people are reading literature (including the Bible) differently than before. Literary interpretation uses what is called “postmodern deconstruction.” Not only is this used in English classes on high school and college campuses, it is being applied to biblical interpretation.

So what should we do? First we must be prepared for the intellectual and philosophical battle we face in the twenty-first century. Colossians 2:8 says, “See to it that no one takes you captive through philosophy and empty deception, according to the tradition of men, according to the elementary principles of the world, rather than according to Christ.”

We must also be studying the Scriptures on a daily basis. Paul says the Bereans were “noble-minded” because “they received the word with great eagerness, examining the Scriptures daily to see whether these things were so” (Acts 17:11).

Studies of born again Christians say that they are not reading their Bibles on a regular basis. An important antidote to postmodernism and relativism is daily Scripture study so that we make sure that we are not being conformed to the culture (Romans 12:2).

We should also develop discernment, especially when we are considering the worldviews that are promoted in the media. Philippians 4:8 says, “Finally, brethren, whatever is true, whatever is honorable, whatever is right, whatever is pure, whatever is lovely, whatever is of good repute, if there is any excellence and if anything worthy of praise, dwell on these things.”

The average student in America watches 22,000 hours of television before graduation. That same student also listens to 11,000 hours of music during their teenage years. Add to this time spent on a computer, on the Internet, and absorbing the culture through books and magazines.

Christians must wisely discern these trends and apply proper biblical instruction to combat these views.