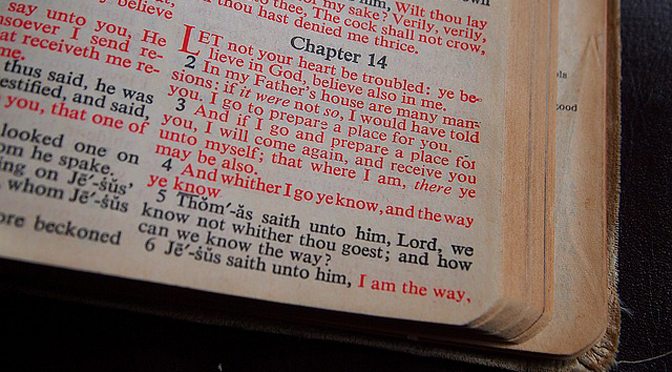 Take this test of basic Bible knowledge to help assess your biblical literacy.  This simple quiz examines some of the key doctrines and events of the Bible.  It will give you a good feel for your breadth and depth of Scriptural knowledge.

This article is also available in Spanish.

It’s alarming to us at Probe Ministries to see the drop in biblical literacy among Americans. Growing numbers of people don’t know what the Bible says, even the most basic foundational truths and people and facts.

Over the past 20 years we have seen the nation’s theological views slowly become less aligned with the Bible. Americans still revere the Bible and like to think of themselves as Bible-believing people, but the evidence suggests otherwise. Christians have increasingly been adopting spiritual views that come from Islam, Wicca, secular humanism, the eastern religions and other sources.{1}

That’s because we’re not reading and studying the Bible. If we don’t know what God says is truth, it makes us vulnerable to believing a lie.

1. Who wrote the first four books of the New Testament?

2. Who wrote the first five books of the Old Testament?

Most conservative scholars hold that the Pentateuch was written by Moses.

3. What two Old Testament books are named for women?

4. What are the Ten Commandments?

5. What is the Greatest Commandment?

6. What is the second Greatest Commandment?

7. What is the Golden Rule?

8. What is the Great Commission?

“Therefore, go and make disciples of all nations, baptizing them in the name of the Father and of the Son and of the Holy Spirit, and teaching them to obey everything I have commanded you. And surely I will be with you always, to the very end of the age.” (Matthew 28:19,20)

9. What was the test of a prophet, to know that he was truly from God?

He had to be 100% accurate in his prophecies. The penalty for a false prophet was death by stoning. (Deuteronomy 18:20-22)

Genesis 5:24 says that Enoch, who was Noah’s great-grandfather, “walked with God; then he was no more, because God took him away.” The other was the Old Testament prophet Elijah, who was taken up to heaven in a whirlwind with a chariot and horses of fire. (2 Kings 2:11)

13. What is the beginning of wisdom?

14. Who delivered the Sermon on the Mount?

15. How did sickness and death enter the world?

Romans 5:12 says that sin entered the world though one man, and death through sin. The fall of man is recorded in Genesis 3, where God’s perfect creation was spoiled by Adam’s sin.

16. Who was the Roman governor who sentenced Christ to death?

17. Who are the major prophets?

18. What people group is the Old Testament about?

The Hebrews, who became the nation of Israel. They were descendants of Abraham though Isaac.

19. What happened while the Lord Jesus was in the desert for 40 days?

He was tempted by the devil. (Matthew 4:1) Hebrews 4:15 tells us that He was tempted in every way, just as we are—yet was without sin.

21. Who was the first murderer?

22. Which person was afflicted with terrible trials but trusted God through it all?

23. Who was Israel’s most well-known and well-loved king?

26. Who were the two people in the famous fight with a stone and a sling?

The early years of the church, as the gospel begins to spread throughout the world.

29. On what occasion was the Holy Spirit given to the church?

30. Whom did God command to sacrifice his only son?

31. What was the Old Testament feast that celebrated God’s saving the firstborn of Israel the night they left Egypt?

32. Who was the Hebrew who became prime minister of Egypt?

33. Who was the Hebrew woman who became Queen of Persia?

34. Who was the pagan woman who became David’s great-grandmother?

35. Which angel appeared to Mary?

37. What happened to Him three days after He died?

38. What happened to the Lord Jesus 40 days after His resurrection?

39. What should we do when we sin, in order to restore our fellowship with God?

1 John 1:9 tells us, “If we confess our sins, He is faithful and just to forgive us our sins, and to cleanse us from all unrighteousness.”

40. How did the universe and world get here?

Genesis 1:1 tells us, “In the beginning, God created the heavens and the earth.” We are told further in Colossians 1:16 and 17 that the Lord Jesus Christ was the one who did the creating.

41. Where did Satan and the demons come from?

Satan was originally the best and the brightest angel, but he sinned in his pride, wanting to be God. Some of the angels followed him, and these “fallen angels” were cast out of heaven. (Isaiah 14, Ezekiel 28)

42. Who directed the writing of the Bible?

43. Where was the Lord Jesus before He was conceived in Mary?

44. Who taught in parables?

A short, simple story with a spiritual point.

47. With which woman did David commit adultery?

48. Which one of their sons succeeded David as king?

49. Who was the female judge of Israel?

50. Who was the wisest man in the world?

52. Who was the most humble man on earth?

53. Who was the strongest man on earth?

54. Where were the two nations of God’s people taken into captivity?

55. Which cupbearer to a foreign king rebuilt the wall of Jerusalem?

56. Who were the two Old Testament prophets who worked miracles?

57. Which Old Testament prophet spent three days in the belly of a great fish?

58. What is the last book of the Old Testament?

59. For which Israelite commander did the sun stand still?

60. Who was the first king of Israel?

61. Who built the temple in Israel?

62. Which of the twelve tribes of Israel served as priests?

63. Which city fell after the Israelites marched around it daily for seven days?

64. What did God give the Israelites to eat in the wilderness?

65. Which two people walked on water?

67. Who betrayed Jesus to the priests, and for how much?

Our Father, who art in heaven, hallowed be thy name. Thy kingdom come, thy will be done on earth as it is in heaven. Give us this day our daily bread, and forgive us our trespasses as we forgive those who trespass against us. And lead us not into temptation, but deliver us from evil. For thine is the kingdom and the power and the glory forever. Amen. (Matthew 6:9-13)

69. Who was the first person to see the risen Lord?

70. Which prophet and cousin of the Lord was beheaded?

71. To what country did the young Jesus and His parents escape when Herod was threatening His life?

72. What was Christ’s first miracle?

He turned water into wine at the wedding at Cana. (John 2:11)

73. Which one of the Lord’s personal friends did He raise from the dead?

74. Who was the greatest missionary of the New Testament?

76. Whom did an angel release from prison?

77. Which event caused God to splinter human language into many tongues?

The building of the Tower of Babel. (Genesis 11)

78. Which chapter of an Old Testament prophet’s book gives a detailed prophecy of the Messiah’s death by crucifixion?

79. Who wrestled all night with the Lord and was left with a permanent limp?

80. Which two pastors did Paul write letters to?

81. Who was hailed as a god when he was bitten by a snake but nothing bad happened?

82. Which two New Testament writers were brothers of the Lord Jesus?

83. Which two New Testament books were written by a doctor?

85. In what sin did Aaron lead the Israelites while his brother Moses was up on the mountain talking to God?

They made an idol in the form of a golden calf. (Exodus 32)

86. How many books are there in the entire Bible?

87. What’s the difference between John the Baptist and the John who wrote several New Testament books?

John the Baptist was a prophet who proclaimed the kingdom of God was near in preparation for his cousin Jesus’ ministry. The John who wrote the gospel of John, the epistles—1, 2 and 3 John—and Revelation, was one of the twelve apostles and one of those closest to the Lord, along with Peter and James. He called himself “the disciple whom Jesus loved.”

88. Who saw the Lord appear to him in a burning bush?

Twelve. They were the ancestors of the twelve tribes of Israel. (Genesis 35:22)

90. Who gave up his birthright for a bowl of stew?

91. Which Psalm starts out, “The Lord is my shepherd, I shall not want?”

92. Who disowned the Lord Jesus three times before a cock crowed?

93. What did the Lord do just after the Last Supper to demonstrate His love and humility?

94. Where is the New Testament “Hall of Faith?”

95. Who appeared with the Lord Jesus in glory on the Mount of Transfiguration?

97. Which Old Testament prophet married a prostitute because God told him to?

98. What are the two sacred ordinances that the Lord commanded us to observe?

99. What are supernatural enablings that allow a believer to serve the Body of Christ with ease and effectiveness?

100. Whose tomb was Christ buried in?

103. What is the book of Revelation about?

The end of the world.