How Reason Can Lead to God – Part 2

Home How Reason Can Lead to God – Part 2

Dr. Michael Gleghorn continues to make a compelling case for how reason can lead us, step by step, to the logical conclusion of God’s existence based on the book ‘How Reason Can Lead to God.’ 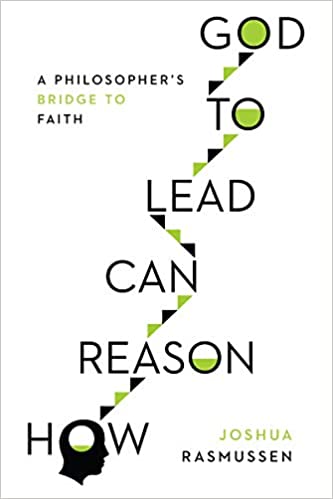 In this article we’re continuing our examination of Christian philosopher Josh Rasmussen’s book, How Reason Can Lead to God.{1} In my previous article, I introduced the book and showed how Rasmussen began constructing a “bridge of reason” that led to “an independent, self-sufficient, . . .   eternally powerful foundation of all reality.”{2}

But Rasmussen goes further, arguing that there must also be “a certain mind-like aspect” to this foundation.{3} And that’s what we’ll explore in this article. We’re going to follow Rasmussen’s lead as he takes us over the “bridge of reason.” And once we’ve taken that final step, we’ll see that it’s led us not to some cold, calculating, “mind-like” reality, but to a very “special treasure.”{4}

But to begin, why does Rasmussen think that the foundation of all reality must be “mind-like”? To answer that question, consider that one of the things the foundation has produced is you—and you have a mind. As Rasmussen notes, “you are capable of thinking, feeling, and making decisions.”{5} Indeed, if you’re awake and functioning normally, you have some awareness of what is going on “around” you—and even of what is going on “within” you. That’s because you possess a conscious (even self-conscious) mind. How is this to be explained?

According to Rasmussen there are only two live options: either minds ultimately originate from some sort of “mind-like” or “mental” reality, or else they arise solely from a physical process.{6} Is one of these options better than the other? Rasmussen thinks so, and points to “a construction problem” with the matter-to-mind option.{7} Here’s the problem. Just as a black steel pipe cannot be constructed out of emerald green toothpaste, so a self-conscious mind cannot be constructed from mindless particles. Particles just aren’t the right thing for constructing the thoughts, feelings, and purposes of a mind. In order to construct a mind, “mental materials” are needed. Hence, the foundation of all reality must be mind-like in order to account for the unique features of self-conscious human minds.{8}

But at this point, some may raise an objection. After all, if we say there’s a construction problem going from matter to minds, then wouldn’t there also be a problem in saying that an immaterial mind created the material world? The answer is “No.”

Above, we argued that one can’t explain the thoughts and intentions of human minds by appealing only to material particles. There must rather be an ultimate mind at the foundation of all reality.

But of course, human beings also have bodies. And your body (including your brain) is an example of incredible material complexity. Not only that, but in order for you to be physically alive, the “fundamental parameters” of the universe must be delicately balanced, or “fine-tuned,” with a precision that is mind-boggling. As physicist Alan Lightman observes, “If these fundamental parameters were much different from what they are, it is not only human beings who would not exist. No life of any kind would exist.”{9}

How should we account for such complexity? Can we explain it in terms of chance?{10} That’s wildly implausible. And better explanations are available. After all, one could try to explain the words of your favorite novel by appealing to “chance.” But is that “the best explanation?”{11} Isn’t it far more likely that an intelligent mind selected and ordered the words of that story with the intention of communicating something meaningful to others? While the chance hypothesis is possible, is it really probable? If we’re interested in truth, shouldn’t we prefer the best explanation?

So what is a better explanation for the material complexity that we observe—not only in our bodies, but in the fine-tuning of the universe that allows for our existence? If the ordering of the letters and words in your favorite novel is best explained by an intelligent mind, then what about the biological complexity of human beings? Scientists have observed “that molecular biology has uncovered an analogy between DNA and language.” In short, “The genetic code functions exactly like a language code.”{12} And just as the words in a novel require an intelligent author, the genetic code requires an intelligent designer.

Consider our sense of right and wrong. How should this be explained? Rasmussen proposes that our “moral senses are a window into a moral landscape.”{14} Just as our sense of sight helps us perceive objects in the physical world, so our moral sense helps us perceive values in the moral world. Of course, just as our sense of sight may not be perfect, such that a tree appears blurry or indistinct, so also our moral sense may not be perfect, such that a particular action may not be clearly seen as right or wrong. But in each case, even imperfect “sight” can provide some reliable information about both the material and moral landscapes.{15}

How might we best explain both the moral landscape and our experience of it? “Can the particles that comprise a material landscape, with dirt and trees, produce standards of good and bad, right and wrong?”{16} It’s hard to see how undirected particles could do such a thing. And naturally, they could have no reason to do so.

On the other hand, a foundational mind with a moral nature could account for both the moral landscape and our experience of it. As Rasmussen observes, such a being would account for moral values because of its moral nature.{17} Further, such a being would have both a reason and resources to create moral agents (like us) with the ability to perceive these values.{18} Its reason for creating such agents is that we’re valuable.{19} A mind-like foundation thus offers a better explanation for human moral experience than mindless particles ever could.

Human minds are special for their ability to reason. This ability helps us think correctly. When we reason correctly, we can begin with certain basic truths and infer yet other truths that logically follow from these. For example, from the basic truths that “all men are mortal” and “Socrates is a man” we can logically infer the further truth that “Socrates is mortal.”

But here an interesting puzzle arises. Where does our ability to reason come from? How might we account for the origin of human reason? And one of the interesting topics tackled by Josh Rasmussen in his book, How Reason Can Lead to God, is the origin of reason itself. What’s the best explanation for this incredible ability?

If the universe sprang into being “from nothing, with no mind behind it,” then not only human minds, but even rationality itself, must ultimately come from mindless material particles.{20} But as Rasmussen observes, “If people come only from mindless particles, then reasoning comes from non-reason.”{21} But could reason really come from non-reason? Is that the most plausible explanation? Or might a better explanation be at hand?

The atheistic scientist J. B. S. Haldane once observed, “If my mental processes are determined wholly by the motions of atoms in my brain, I have no reason to suppose that my beliefs are true . . . and hence I have no reason for supposing my brain to be composed of atoms.”{22} For Haldane, if human reason arises entirely from a non-rational historical and physical process, then we have little reason to think that our beliefs are true.

Fortunately, there’s a way out of this difficulty. We can suggest that human reason comes from an ultimately rational foundation. In that case, reason comes from reason. We’ve already seen that the best way to account for minds, matter, and morals is by positing a foundational Mind as the source of all reality. And this is also the best way to account for human reason as well. As Rasmussen notes, “by anchoring reason in the nature of the foundation, we can explain how the foundation of all existence can be the foundation of minds, matter, morals . . . and reason itself.”{23}

In the next section we will follow Rasmussen “to the treasure at the end of the bridge of reason.”{24}

In this article we’ve seen that a foundational Mind offers the best explanation for the existence of human minds and bodies, moral concepts, and even reason itself. In my previous article, we saw that this foundation is also independent, self-sufficient, and eternally powerful. Today, with some final help from the Christian philosopher Josh Rasmussen, we want to pull together the various strands of this discussion to see what unifies the various features of this foundation into a single, coherent being. What sort of being might all these features point to? According to Rasmussen, they all point to a perfect being. But why does he think so?

But why think the foundation of all reality is a perfect being? Simply put, the concept of perfection enables us to account for all the characteristics of this being that reason has revealed to us. Perfection accounts for this being’s independent, self-sufficient, and eternally powerful nature. It also accounts for how this being can be the ultimate foundation of other minds, astonishing material complexity, morality, and reason itself. As Rasmussen observes, “Perfection unifies all the attributes of the foundation” and “successfully predicts every dimension of our world.”{26}

A perfect being is thus the foundation of “every good and perfect gift” that we possess and enjoy, and must surely be described as “the greatest possible treasure.”{27} Moreover, since this being possesses “the maximal concentration of goodness, value, and power imaginable,” it can only properly be termed “God.”{28} Thus, by following the “light of reason” to the end of the “bridge of reason,” we have arrived not at meaninglessness or despair, but at “the greatest possible treasure,” the self-sufficient, eternally powerful, supremely rational, and perfectly good, Creator God.

If you would like to explore the work of Josh Rasmussen further, I would recommend reading his book, How Reason Can Lead to God: A Philosopher’s Bridge to Faith. You can also visit his website at joshualrasmussen.com.

Dr. Michael Gleghorn is both a research associate with Probe Ministries and an instructor in Christian Worldview at Grand Canyon University in Phoenix, Arizona.. He earned a B.A. in psychology from Baylor University, a Th.M. in systematic theology from Dallas Theological Seminary, and a Ph.D. in Theological Studies (also from Dallas Theological Seminary). Before coming on staff with Probe, Michael taught history and theology at Christway Academy in Duncanville, Texas. Michael and his wife Hannah have two children: Arianna and Josiah. His personal website is michaelgleghorn.com.