The Eclipse Declares the Glory of God

Home The Eclipse Declares the Glory of God 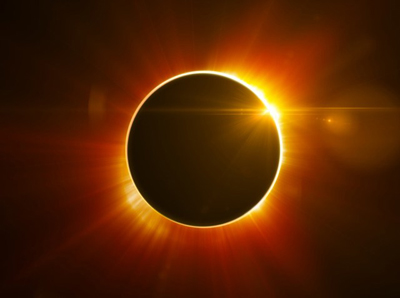 “The heavens declare the glory of God,” Psalm 19 tells us. On August 21, 2017, millions of Americans will have an incredible opportunity to see His heavenly glory in a way most of us never have: through a total solar eclipse. On a path running from Oregon to South Carolina, observers on the ground will see the moon slip in front of the sun, blocking out all its light and dropping the temperature drastically (about 10 to 15 degrees Fahrenheit) and suddenly.

The glory of God isn’t just seen, it’s felt as well. Eclipse-chasers, and even those who have only experienced one total eclipse, report that at the moment of totality (when the moon completely covers the sun, plunging the land into an eerie darkness), people break out with yells and shouts and applause. Many report the hair on the back of their necks standing up. And both locals and visiting astronomers are equally in awe—and often in tears. Like one’s first in-person look at the Grand Canyon, it is deeply emotional to be thrilled by something much, much bigger than oneself.

Illustra Media’s wonderful DVD The Privileged Planet, based on the book by the same name by Guillermo Gonzalez and Jay Richards {1}, exposed me to the magnificence of a total solar eclipse. I will never forget the goosebumps at learning that the sun is 400 times farther away than our moon, but it’s also 400 times larger. This means that both of these heavenly bodies appear to be the same size to us on Earth. This phenomenal “coincidence” [read: declaring the glory of God!] also makes a total eclipse possible. 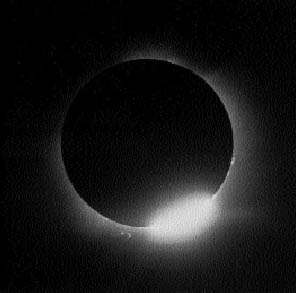 During an eclipse, the heavens declare the glory of God by allowing us to see things about the sun we wouldn’t be able to observe any other way, beautiful and gloriously resplendent. Just before totality we can see “Baily’s Beads.” Only seen during an eclipse, bright “beads” appear at the edge of the moon where the sun is shining through lunar valleys, a feature of the moon’s rugged landscape. This is followed by the “diamond ring” effect, where the brightness of the sun radiates as a thin band around the circumference of the moon, and the last moments of the sun’s visibility explode like a diamond made of pure light. After the minutes of totality, the diamond ring effect appears again on the opposite side of the moon as the first rays of the sun flare brilliantly. These sky-jewelry phenomena are so outside of mankind’s control that witnessing them stirs our spirits (even on YouTube!) with the truth of Romans 1:20—”God’s invisible qualities—his eternal power and divine nature—have been clearly seen, being understood from what has been made, so that people are without excuse.” 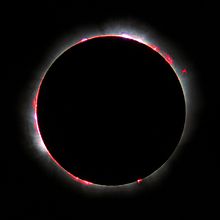 A total solar eclipse offers so much more, though, than Baily’s Beads and the Diamond Ring. At the moment of totality, the pinkish arc of the sun’s chromosphere (the part of the sun’s atmosphere just above the surface) suddenly “turns on” as if an unseen hand flips a switch. I knew God is very fond of pink because of how He paints glorious sunrises and sunsets in Earth’s skies, but those fortunate enough to see a total eclipse can see how He radiates pinkness from the sun itself! The heavens declare the glory of God!

But wait! That’s not all! Along with the flare of the sun’s pink chromosphere, a rainbow-like band called the “flash spectrum” appears when the sun is viewed through a prism! (You can google this to see pictures. The best ones are copyrighted so I can’t show them to you here.) The heavens declare the colorful glory of God! 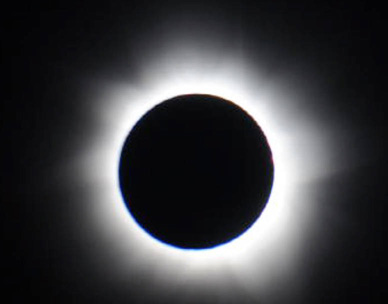 For the few minutes of totality, the naked eye can see the sun’s lovely corona (Latin for crown) streaming out from the sun. We can’t see the corona except during an eclipse because looking straight at the sun for even a few seconds causes eye damage, and because the sun’s ball of fire overwhelms the (visually) fragile corona. This is another way that an eclipse allows us to see how the heavens declare the glory of God.

Astronomer Guillermo Gonzalez noticed details about eclipses that got him excited:

These facts of the heavens declare the glory of God!

This eclipse will be the most-viewed ever. I base this proclamation on four factors: 1) the attention it will get from the media; 2) the superb coverage of the highway system in our country; 3) the typical weather on that date; and 4) the vast number of people who will have access to it from nearby large cities.

Whether you are fortunate enough to be in the path of the total eclipse, or like me will only get to see 75% of the sun’s surface covered by the moon (with eclipse glasses, of course!), this extremely important sky event will be proclaiming to everyone that the heavens declare the glory of God. May it make a lasting impression on us all that teaches us more about God’s glory!

This blog post originally appeared at blogs.bible.org/engage/sue_bohlin/the_eclipse_declares_the_glory_of_god on August 9, 2017.