The Power of a Mother’s Prayers

Home The Power of a Mother’s Prayers

Jesus’ most famous parable in Luke 15 tells the story of a rebellious young man usually dubbed “the Prodigal Son” who demanded his share of his father’s inheritance while his dad was still alive, shameful enough, but then went off into “the far country” to squander it on riotous living. A modern-day prodigal and his mother have written their story, telling parallel stories from each one’s perspective. The son’s “far country” included drug dealing, living it up as a party animal, and gay promiscuity leading to a diagnosis of AIDS. But God brought both mother and son out of the far country to Himself. 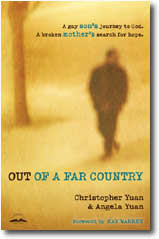 Because I am privileged to walk with a number of people out of their own personal “far countries” of homosexuality, Out of a Far Country was a compelling read for me. But because I am also a mother, Angela Yuan’s testimony of trusting Christ and then entrusting her beloved son into His hands again and again as a faithful prayer warrior, was deeply encouraging as well.

I was reminded of several lessons on prayer through this book.

First, it’s better to pray big than to try to micro-manage the outcome. Angela continued to relinquish her own desires for her son to the Lord’s better plan, which was for Christopher to walk in his true identity as a beloved child of a loving heavenly Father. When her son was angry and rebellious, she kept her eyes focused on the Lord instead of Christopher. She writes, “I started fasting and praying, asking God for wisdom and discernment. I had no idea what it would look like, but I had a clear sense that Leon and I needed to step aside and get out of the way so that God could work in Christopher’s life.”

When Christopher was three months away from graduating from dental school, he learned he was expelled because of his foolish, illegal and sinful choices. His parents went to meet with the dean. Both the dean and the son expected the senior Yuans to put pressure on the school, but instead, Angela said, “Actually, it’s not important that Christopher becomes a dentist. What’s important is that Christopher becomes a Christ follower. Leon and I have flown down to Louisville to tell you”—I looked over at Leon—”that we will support whatever decision you make. I only pray that my son will turn to God.”

And he did. It didn’t happen until he was incarcerated for his drug dealing, but God answered the far more important prayer. 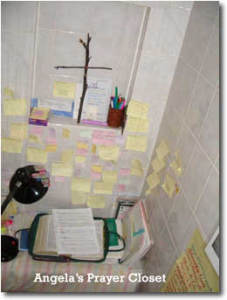 Second, let go of your time line. We are such impatient people! We start praying and we want God to answer in the next day. Or week. Or month. But while He is at work behind the scenes, unscrambling the mess we tend to make of our lives, we don’t think He is listening or answering. Angela prayed for years for God to bring Christopher out of the far country, and when He did, it was glorious. Christopher went from prison, where he met the Lord Jesus, to Moody Bible Institute, and then graduate school at Wheaton College, and now has a worldwide ministry telling his/their story and bringing great glory to God in the process.

Third, prayer is essential for the spiritual battles against the forces of darkness. Christopher’s choices to engage in ongoing sexual sin, drug use and wild living went hand-in-hand with a spirit of rebellion and a strong delusion. Both of these involve demons, because his sinful choices opened up doorways to demonic influence. The Yuans’ book provides plenty of examples of the spiritual blindness that resulted. But Angela’s faithful time in the Word of God and intercessory prayer tore down the strongholds that held her son captive to his fleshly desires and his spiritual bondage. She turned a shower stall into her prayer closet, where she spent literally hours every day immersing herself in the Bible and prayer.

Fourth, remain thankful. When Christopher called his parents to tell them that he had been arrested and was in jail, Angela recognized this as the answer to her frequent prayer: Lord, do whatever it takes to bring this prodigal son out of that far country to you. For the first time in years, she knew that where her son was, and that he was safe. She grabbed a length of adding machine tape and wrote down that blessing. And then, as God unfolded His glorious plan for drawing Christopher to Himself and then redeeming the pain of his rebellion, she kept adding to the blessing list over the years. When I heard her tell her story at an Exodus International conference several years ago, she held up her rolled-up blessings list and let it drop: it’s about six feet long! Christopher tells me it’s almost full on the second side as well. Choosing to focus on the ways in which God continues to bless us in the midst of suffering, developing an attitude of gratitude, keeps us from losing heart in a hard situation.

Fifth, persistent prayer changes the one praying. Desperation for her son drove Angela Yuan to an incredible intimacy with her Savior. Her daily time in His word and her gift of intercessory prayer drew her heart ever closer to Him. Out of the Far Country isn’t just a story of a mother’s and son’s spiritual journey, it is an inspiration to “always pray and not give up” (Luke 18:1). 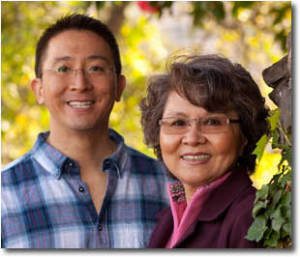