What is the “Authentic Self”?

Home What is the “Authentic Self”?

The concept of the “authentic self” is a wonderful-sounding, important element of politically-correct thinking. Especially if one’s “authentic self” includes a deviation from standard sexuality. Many people are proud of themselves for being progressive in encouraging others to admit and embrace inclinations and desires that a few decades ago were considered shameful.

Oprah was a major proponent of the idea. On her television show and her magazine, she encouraged her faithful followers to be open and real about their true thoughts and feelings, desires and dreams, passions and embarrassments. She was (and continues to be) especially insistent on the importance of coming out as LGBT (lesbian, gay, bi-sexual or transgender) if someone had even the faintest leanings in that direction.

I remember when Oprah interviewed Ted Haggard, disgraced former pastor and head of the National Association of Evangelicals. He said he was a heterosexual man with temptations toward homosexuality (that he regretted giving into), which is consistent with a biblical worldview. Oprah would have none of it. She pronounced him gay and declared with authority, “That is who you are!” It was clear she wanted him to embrace what she considered his “authentic self” and stop denying himself.

It made me think . . . what if a new movement rose up attempting to normalize obesity, calling it “a different kind of beautiful”? And what if obese people came on her show and said, “Oprah, girlfriend, you’ve had a lifelong inclination to overeat and not exercise. Face it! You are a fat girl! That is who you are! Stop lying about it and embrace it as who you truly are!” She wouldn’t like it because she knows some weaknesses are worthy of struggling against. She wouldn’t like it because she doesn’t want her temptations and her inclinations to define her.

Because temptations and inclinations can be wrong.

When politician John Edwards had an adulterous relationship with Rielle Hunter while his wife battled cancer, Oprah booked her on the show. It was quite intriguing to me to see how Oprah refused to approve of Ms. Hunter’s choices. 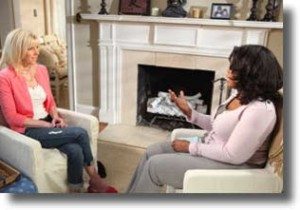 Oprah: When this is all said and done and we look back on this time of you, Rielle Hunter, the mistress and all of that, what is it you want people to really understand about what has happened here?

Oprah: Why can’t it just be that they think that it’s wrong?

This is not the first time we’ve seen this in human history. The book of Judges tells the unhappy story, over and over, of the nation of Israel stumbling into one disaster after another that required rescue because “every man did that which was right in his own eyes” (Judges 21:25).

When we do what is right in our own eyes, it never goes well with us. That’s because we are fallen, broken people who live in a fallen, broken world, and we desperately need divine help and re-direction. We can’t trust our hearts to tell us who we really are, who is our “authentic self,” because God declares that the human heart “is deceitful above all things, and desperately wicked: who can know it?” (Jeremiah 17:9)

The problem with what the world calls our “authentic self” is that it is the sum of our broken thoughts, feelings, desires, insecurities, and dreams. The “authentic self” that the world urges us to embrace is what the Bible calls the flesh, the part of us that operates independently from God and needs to be crucified, not glamorized (Galatians 5:24). In fact, Jesus had a completely opposite call for us: “If anyone wishes to come after Me, he must deny himself, and take up his cross and follow Me” (Mark 8:34).

When we DO deny ourselves, take up our cross and follow Jesus, the Holy Spirit transforms us so we look more and more like Jesus (2 Cor. 3:18). Thinking biblically, the true and authentic self is the one that will last into eternity. A hundred years from today, every Christ-follower will be free from flesh, free from the old rotten self, reveling in the freedom and joy that comes from being completely holy and righteous and true to our re-created self that looks and acts and thinks like Jesus but with the “flavor” of our redeemed individual personalities and temperaments.

Jeanette Howard, author of Out of Egypt, explaining her journey out of lesbianism, recently wrote, “I am tired of people claiming that they need to be ‘true to themselves.’ No they don’t. They, like all believers, need to die to themselves and be true to God. That is authentic discipleship.”

More and more Christians are throwing in the towel in their fight against unholy sexual and relational temptations, claiming to follow their “authentic self.” Even worse, a growing number of churches are doing something similar by embracing same-sex marriage. I have a question for them. If God really created them to be gay and blesses that identity today, what will happen a hundred years from today? Will there be homosexuality in heaven? There will be no sex in heaven because the only marriage will be between the Church and the Lamb, the Lord Jesus Christ. If one’s identity is wrapped up in same-sex attractions, as it is by those claiming to be “gay Christians,” who will they be when all sexual and relational brokenness is a thing of the past, a mere memory of earthly life?

I suggest that a believer’s true and real and lasting “authentic self” is all wrapped up in not who we say we are, but who God says we are: His beloved child, redeemed and purified and made holy as He is holy. Chosen, accepted, and included, a citizen of heaven and a member of God’s household. Belonging to Jesus because He bought us with His very lifeblood. Sealed with the Spirit, made brand new from the inside out.

Now that’s an “authentic self” I can get excited about!

This blog post originally appeared on April 7, 2015, at
blogs.bible.org/engage/sue_bohlin/what_is_the_authentic_self