Nones: Are Not Mostly Christians Who Are Unaffiliated

Steve Cable determines that ‘Nothing in Particulars’ are not actually practicing Christians who just don’t want to affiliate with a particular denomination.

Earlier we examined the significant increase in Nones (those who said their religious affiliation was atheist, agnostic or nothing in particular), which grew from 25% of young adults in 2007 to over 35% of young adults in 2014 according to the U.S. Religious Landscape Survey taken by Pew Research.{1} In this post, we will examine the level of involvement in religious practices that these Nones, and particularly the Nothing in Particulars, reported in response to the survey questions. We will try to answer the question: “Are these Nothing in Particulars actually Christians who do not feel comfortable announcing an affiliation with a particular religious group?” 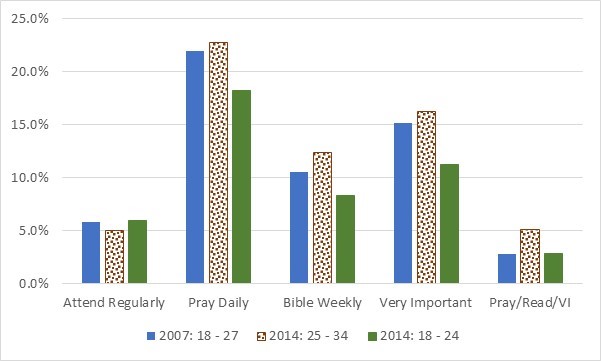 First, let’s consider the religious practices of the Nothing in Particulars. In Figure 1, we see their commitment to some common behaviors of nominal and committed Christians. The actual questions are:

As shown, the figure looks at the answers to these questions for three different groups:

Note that the corresponding age groups across the two survey dates have roughly the same percentage of respondents who participate in these practices, but the youngest group lags their elders in praying, Bible reading, and attitude toward religion. 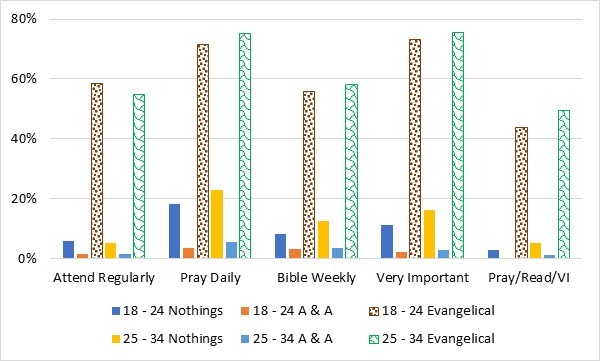 How do these levels relate to the responses from Evangelicals on the one hand and from Atheists and Agnostics on the other hand? Figure 2 gives us the answer to this question.

For example, looking at reading the Bible at least once a week, we find about one in ten Nothing in Particulars, about one in thirty-five Atheists and Agnostics, and almost six out of ten Evangelicals.

Looking at the combination of prayer, Bible reading, and considering religion a very important part of life, we find about one out of twenty-five Nothing in Particulars, about one in one hundred Atheists and Agnostics, and almost five out of ten Evangelicals.

Clearly in this area of religious practice the Nothing in Particulars appear to be much closer in their practice to those who profess Atheism or Agnosticism than those who are Evangelical.

The data clearly does not support the notion that the Nothing in Particulars are actually practicing Christians who just do not want to affiliate with a particular denomination. In fact, the vast majority of Nothing in Particulars have no regular activity associated with worshipping God. Perhaps they believe in Christianity even though they don’t attempt to practice it. We will consider that possibility in our next blog post.