Steve Cable provides an update on those with no affiliation with religious traditions. It appears that soon, the majority of American emerging adults will identify as something other than a Christian.

Pew Research has done a great service to those who want to understand the current trends of religious beliefs in America. In 2007, they interviewed about 35,000 Americans to create the 2007 American Religious Landscape Study {1}. Then in 2014, they interviewed a similar size group of Americans using many of the same questions (along with a few new or different questions) to create the 2014 American Religious Landscape Study{2}. Most surveys of this nature include 1,000 to 3,000 respondents which limits their accuracy when considering subsets of the data by age, religious preference, education, ethnicity, etc. By collecting responses from such a large number of people, we can look at these subsets with a much greater level of confidence.

I want to begin by updating our understanding of the dominant religious trend in America this century: the so-called rise of the Nones{3}. The Nones are those people who choose not to affiliate with any religious tradition. In the Pew survey, Nones include atheists, agnostics, and “nothing in particular” respondents. We can understand how this phenomenon is growing by examining the results shown in Figure 1. People were asked “What is your present religion, if any?” 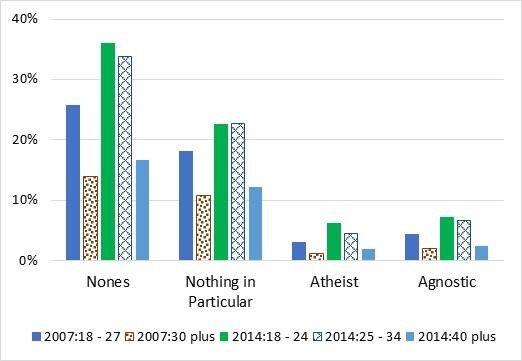 In Figure 1, the first group of bars reflects the percentage of Nones at different times (i.e. 2007 and 2014) and for different age segments. The first two bars show the percentage of Nones in 2007 for those between 18 and 27, and for those 30 years and older. As shown, over 25% of Americans under the age of 28 selected a None category. For those 30 and older, only 14% selected a None category. This was a tremendous growth over the levels up to the early 1990’s when the GSS survey{4} reported 11% of those under 30 and 7% of those 30 and over.

But this amazing growth in Nones is far from over, as shown in the last three bars in the first group summarizing the response in 2014. As shown, the youngest group (ages 18 – 24) showed 36% selecting a None category. The group from 25 to 34 selected None at almost the same rate, 34%. This age group would have been 18 to 27 in 2007 when about 25% of them selected None. Over this seven-year period almost 10% of that age group switched from some other religion to None.

Some people suggest that these young adults will return to church as they begin raising children. What does the data say? Looking at a slightly older group, I compared those 23 to 32 in 2007 with those 30 to 39 in 2014. What I found follows the same trend: 23% of those in 2007 were Nones while 27% of those in 2014 were Nones. Even those over forty increased to 17% from 14%, a significant growth over the level only seven years earlier for those age 30 plus at the time. Thus, we see no trend of emerging adult Nones turning into church attending, Christians as they age in fact just the opposite. More of them are becoming Nones as they move towards middle age

In my next post, we will see what these Nones believe about basic Christian doctrine and if they have a somewhat active spiritual life. And in later post, we will also look to see what religions these Nones identified with as children.

For now, our bottom line takeaway is that more than 46% of emerging adults (ages 18 through 29) identify with either another religion (10%) or  None (36%), meaning that in a few short years the majority of American emerging adults will identify as something other than a Christian. If this trend concerns you, please take a look at our church-wide and small group study called Periscope. Periscope is targeted to address issues taking today’s believer captive and blunting their witness to the world around them. For more information, go to www.upPeriscope.com.

3. Stephen Cable, The Rise of the Nones, November 6, 2016, probe.org/the-rise-of-the-nones-reaching-the-lost-in-todays-america/

4. General Social Survey 1990, conducted by the National Opinion Research Center. The data were downloaded from the Association of Religion Data Archives, www.TheARDA.com, and were collected by the James Davis, Tom Smith and Peter Marsden.