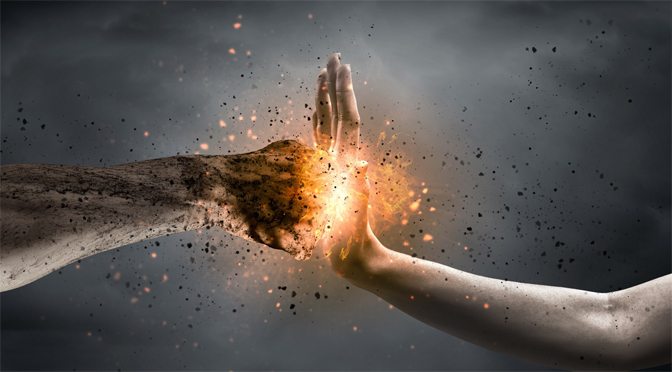 Kerby Anderson provides a concise, biblical worldview perspective on the important topic of spiritual warfare. Every Christian needs to understand that our battle is against spiritual forces not against other humans, who need Christ. He gives us practical advice on understanding our spiritual weapons and applying them to take on the forces of Satan in this world. 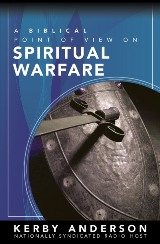 Sadly, many Christians do not even know there is a spiritual war taking place around them. They may even become a spiritual casualty and never understand what has happened to them.

So many Christians have become mortally wounded in the spiritual conflict that takes place around them. They may be so emotionally spent or spiritually dead that they are essentially no longer of any use to God.

Others may have less serious wounds from this spiritual conflict, but are still affected by the battle. They still go about the Christian life but are not as effective as they could be because of the “battle scars” they carry with them.

Jesus never promised that the Christian life would be easy. In fact, He actually warned us of the opposite. He says in John 16:33 that “in this world you will have trouble.”

Anyone who takes even a brief look at the history of Christianity knows that is true. Jesus was beaten and crucified. Most of the disciples died martyrs deaths. Millions of Christians were persecuted throughout history.

Christians today suffer persecution in many lands, and all of us wake up to a spiritual battle every day. That is why we need to be prepared for battle.

So where does this battle take place? Actually the Bible teaches that spiritual warfare takes place in various places in heaven and on earth.

The Bible also talks about the battle in the heavens. When a passage in Scripture talks about heaven, it may be referring to one of three places: (1) The first heaven is what we would call the atmosphere, (2) The second heaven is where the angels fly and do battle (Revelation 12:4-12; 14:6-7), and (3) the third heaven is also called “Paradise” and is what Paul describes in 2 Corinthians 12: 2-4:

Spiritual warfare is the spiritual battle that takes place in the unseen, supernatural dimension. Although it is unseen by humans, we can certainly feel its effects. And we are to battle against spiritual forces in a number of ways.

First, we need to realize that the weapons of this warfare are not human weapons fought in the flesh. Instead, they are spiritual weapons such as truth and righteousness that can tear down strongholds and philosophies that are in opposition to God.

For though we walk in the flesh, we do not war according to the flesh, for the weapons of our warfare are not of the flesh, but divinely powerful for the destruction of fortresses. We are destroying speculations and every lofty thing raised up against the knowledge of God, and we are taking every thought captive to the obedience of Christ (2 Corinthians 10:3-5).

We can also have confidence because God “rescued us from the domain of darkness, and transferred us to the kingdom of His beloved Son, in whom we have redemption, the forgiveness of sins” (Colossians 1:13).

Many Christians do not like the warfare imagery in the Bible, but that is how the spiritual life is described. We need to prepare for this spiritual battle even if we would like to ignore the battle for truth and error as well as the battle for life and death that is taking place around us.

Third, the Bible tells us that to prepare for battle. We must wear the right armor and have the right weapons, which include truth, righteousness, the gospel, faith, salvation, and prayer:

Stand firm therefore, having girded your loins with truth, and having put on the breastplate of righteousness, and having shod your feet with the preparation of the gospel of peace; in addition to all, taking up the shield of faith, with which you will be able to extinguish all the flaming arrows of the evil one. And take the helmet of salvation, and the sword of the Spirit, which is the Word of God. With all prayer and petition pray at all times in the Spirit (Ephesians 6:14-18a).

The Bible also calls upon us to be strong in the Lord. We should be steadfast in our resistance to the Devil. We do this by putting on the whole armor of God and resisting Satan. Ephesians 6:10-11 says, “Finally, be strong in the Lord, and in the strength of His might. Put on the full armor of God, so that you will be able to stand against the schemes of the devil.”

One way to understand the nature of spiritual warfare is to consider the three Ws: our walk, our weapons, and our warfare.

We should understand that we didn’t start this war but it has been going on long before we came on the scene. For a war to exist, there must be threat from those intend to harm others.

For the battle to be successful, those who are threatened must be willing to stand up and fight. Many wars have been lost because good people refused to fight. And many Christians believe that the reason Satan has been so successful in the world is because either (1) Christians have been unwilling to fight, or (2) Christians have not even been aware that there is a spiritual battle.

We are also instructed to wear armor before we go into battle (Ephesians 6). We are to gird our loins with truth (vs. 14a). That means we need to define the truth, defend the truth, and spread the truth. We are also to wear the breastplate of righteousness (vs. 14b). That means we are to rely on the righteousness of Jesus and live holy and righteous lives. We are also to take up the shield of faith (vs. 16). When we have bold faith, we are able to extinguish all the flaming arrows of Satan. And we are to take the helmet of salvation (vs. 17). We need to be assured of our salvation and stand firm in that assurance.

The third W is our warfare. What is the goal of spiritual warfare? Paul says, “We are destroying speculations and every lofty thing raised up against the knowledge of God, and we are taking every thought captive to the obedience of Christ” (2 Corinthians 10:5). We cannot fight this war with physical weapons because our targets are not physical. They are intellectual and spiritual. So we cannot fight them with guns or planes or bombs.

The word “speculations” (which is sometimes translated “imaginations”) refers to the mind. It includes our thoughts and our reflections. So we should challenge the false ideas that Satan has encouraged in the world by countering unbiblical speculations and proclaiming God’s truth.

The World, the Flesh, and the Devil

How does spiritual warfare affect us?

When the New Testament uses the term “world,” most of the time it is a translation from the word kosmos. Sometimes it can mean simply the planet earth (John 1:10; Acts 17:24). But when we talk about the influence of the world on our spiritual life and on our souls, we are talking about the worldly system in which we live. This world system involves culture and philosophy that is ultimately in opposition to God. That doesn’t mean that everyone is evil or that the world’s system is filled with nothing but error. But it does mean that the world can have a negative influence on our souls.

Paul warns not to be conformed to this world (Romans 12:1). He also warns us not to let our hearts and minds be taken captive to these false ideas: “See to it that no one takes you captive through philosophy and empty deception, according to the tradition of men, according to the elementary principles of the world, rather than according to Christ” (Colossians 2:8).

The second influence is the flesh. Like our previous term, the word flesh can have different meanings. Sometimes it merely refers to our body: our flesh and bones (Luke 24:39; Acts 2:26). In this context, however, flesh is a second area of temptation and thus an important instrument of sin. We see this in the fact that we are born with a sin nature (Romans 7:14-24; 8:5-9). It is part of our bodies (Romans 7:25; 1 John 1:8-10) even after we have accepted Jesus Christ. But the good news is that its power over us has been broken (Romans 6:1-14) so that we can have victory over sin (Romans 8:1-4).

A third influence is the Devil. The ruler and mastermind behind the world’s system is Satan. He can use the various distractions of the world’s system to draw us into sin, temptation, and worldliness. We read in 1 John 2:15 that “If any one loves the world, the love of the Father is not in him.” So the Devil can use the world to turn our affections from God to the world.

Satan can also attack us through our flesh. He can entice our flesh with various temptations. We read in 1 John 2:16 that “For all that is in the world, the lust of the flesh, the lust of the eyes, and the boastful pride of life, is not from the Father, but is from the world.” He can draw our attention away from God by manipulating the desires of the flesh.

We should also realize that we are not warring against flesh and blood but against a spiritual enemy. So even though we might be tempted to think that people are our real enemy, our real enemy is Satan and his demons. People are merely pawns in the heavenly chess game being played out in our lives and in our world.

Paul tells us that “though we walk in the flesh, we do not war according to the flesh, for the weapons of our warfare are not of the flesh, but divinely powerful for the destruction of fortresses” (2 Corinthians 10:3-4). So what are those weapons? It is interesting that Paul does not give a list to those who he is writing to in the church in Corinth. Therefore, we must assume that they were already aware of what those weapons are based on other letters Paul wrote to the various churches.

One obvious weapon is the weapon of truth. Believers are given insight into both the earthly realm and the heavenly realm because of what has been revealed in Scripture. We know what is behind the forces we wrestle with (Ephesians 6:12).

Another weapon is love. In fact, the Bible links truth with love (“speaking the truth in love” —Ephesians 4:15). Love is also a very powerful weapon in this spiritual warfare that we encounter. We should not approach people with anger or judgmentalism. But we must understand how important love is in dealing with others (1 Corinthians 13).

And a very important weapon is prayer. We are told in 1 Thessalonians 5:17 to pray continually (some translations say to pray without ceasing). We are exhorted to pray about the circumstances we encounter and to use prayer as a weapon in our spiritual battle. When Paul talks about Christians putting on the armor to fight spiritual battles, he says that “with all prayer and petition” we are to “pray at all times in the Spirit” (Ephesians 6:18).