Did (Duck Dynasty’s) Phil Get it Wrong? Is Homosexuality Sin?

Home Did (Duck Dynasty’s) Phil Get it Wrong? Is Homosexuality Sin? 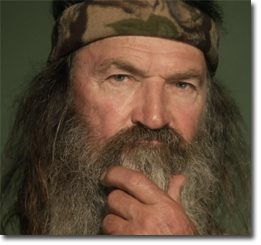 In one of the biggest social media flaps since social media was invented, Duck Dynasty’s Phil Robertson openly said that homosexuality is sinful. Then the cyber world blew up in a clash of worldviews—the progressive, whatever-floats-your-boat perspective of A&E, the cable network that profits greatly from the Robertsons’ TV show, against the traditional biblical view of sin and sexuality. A lot of people think that Phil’s old-fashioned morality is not only antiquated but unfair.

Is it? Is homosexuality a sin? If people are born gay, why would God condemn people for being the way He made them? What kind of God would do that?

Let me answer those questions in reverse order. First, how do we know that people are born gay? This idea is a newcomer on the scene of human history, arising only within the past hundred years—maybe only fifty. We “know” it because people keep saying so, and people say so because, looking into the rear view mirror of their lives, many of those who eventually identify as gay recall always feeling different, “other than.” According to the spirit of the age, that means they were always gay. Which means sexually and romantically attracted to people of the same sex.

But think about a newborn baby. Is he or she sexually and romantically attracted to people of the same sex? No, of course not. That is an emotional development issue that will arise years down the road. Consider a toddler: how does one find the gay kids in a church or daycare nursery? You don’t. But even in toddlers, some temperament and personality differences have surfaced, the kinds of differences that can lead to a child feeling “other than.”

Little boys who are emotionally sensitive, artistic and creative, can be uncomfortable around the rough-and-tumble boys who are far more physically aggressive, sporty and relationally insensitive. It doesn’t mean they’re gay, it means their design, their God-chosen kind of masculinity, is different. They’re probably going to feel “other than,” and later on someone will label that as gay. It’s not.

Little girls who have athletic gifts and abilities, who don’t care for pink or dresses or nail polish and are often natural leaders, can be uncomfortable around the girly-girls who are interested in very different things. It doesn’t mean they’re lesbian, it means their design, their God-chosen kind of femininity, is different. They’re probably going to feel “other than,” and later on someone will label that as lesbian. It’s not.

People are not born gay, which is a constellation of beliefs and feelings about oneself and others that is the result of many interactions with many people over many years. Just like people are not born prejudiced. Or entitled. Or English speaking, for that matter. But all those things can become so entwined with a sense of self that it feels like that’s who one is.

Recently, my husband was talking with a new friend who struggles with same-sex attraction. His friend said it was hard growing up in a slender “case” (body type) and so sensitive, and that’s why he was gay. My husband pointed out that he, too, had the same body type and was emotionally sensitive, that that was their design. Ray talked to him about the gender spectrum for different kinds of masculinity as God’s creation, and his friend absolutely lit up with gratitude. He had never heard that the way God had made him didn’t mean he was gay, it meant he was gifted, and he had never heard an “everstraight” like my husband acknowledge that boys and men can live on that end of the spectrum and not identify as gay. There is another way of explaining the feeling of “other than” that honors both the person and the God who made them in a way that has often not been appreciated or affirmed.

But let’s turn to the first question: is homosexuality a sin?

It’s important to define your terms. What do you mean by homosexuality? Our culture has clouded the biblical perspective of the issue. Do you mean being same-sex attracted? Or do you mean “stepping over the line,” actually engaging in same-sex romantic and sexual relationships? What Phil Robertson did, which is part of the firestorm, is to shine a light on what the Bible says: all sex outside of marriage is sin, both opposite-sex and same-sex relationships. Our sex-saturated culture finds that offensive and unacceptable. Sex is seen as a right and a basic need of life, when it is neither.

But the Bible never condemns same-sex attractions, which constitute temptation and not sin. People generally discover, not choose, that they are drawn to the same sex, and there are very good reasons for this. As with all temptations, God says to stand against them and not give into them. It is foolishness to define oneself by our temptations and weaknesses! (Much better to define ourselves the way God sees us, as His beloved child who desperately needs Him.)

So define homosexuality. If you mean simply feeling “other than” and different, complicated by being drawn to members of the same sex, then homosexual attractions are temptation, not sin. If you mean acting on those attractions to engage in emotionally dependent and/or sexual relationships, then according to the Bible’s standards, yes that is sin. Note how God addressed Cain’s struggle with feelings and temptations: “Sin is crouching at your door. It desires to have you, but you must master it.” (Genesis 4:7) So it really comes down to feelings vs. behavior. The feelings are not necessarily sinful (although sin begins in the mind, where attractions can cross over the line into the sin of lust, regardless of the object of those attractions), but behavior always is. We need to keep homosexuality in the context that God does: pre-marital sex, adultery, same-gender sex, incest, and sex with animals: anything outside the marriage bed (defined as one man and one woman, Gen. 2:24) is sin.

Many people have a faulty concept of a distant, scowling god sitting on his throne looking for people having a good time so he can be mad at them, looking for an excuse to hurl thunderbolts at them for daring to enjoy themselves. The God of the Bible is not Zeus. Jesus corrected many aspects of our misunderstandings of His Father. He is a loving God who put guardrails on the treacherous mountain road of human sexuality. He doesn’t condemn people who run off the safety of the road by crashing through the guardrails He put in place; He knows that the natural consequences of running off the cliff are their own discipline. God says, “Don’t have sex outside of marriage” because He loves us and knows that sex outside of marriage brings pain to the soul (as well as dishonoring everyone involved, including Him).

God doesn’t make anyone gay, but He is full of compassion for those who find themselves with same-sex attractions. He warns us against all kinds of sexual sin because He knows how destructive it is when we violate His intention and design for our bodies and souls. He wants so much better for us.

This blog post originally appeared at blogs.bible.org/tapestry/sue_bohlin/did_phil_get_it_wrong_is_homosexuality_sin on Jan. 1, 2014