Why Have So Many Christians and Churches Become Pro-Gay?

Home Why Have So Many Christians and Churches Become Pro-Gay? 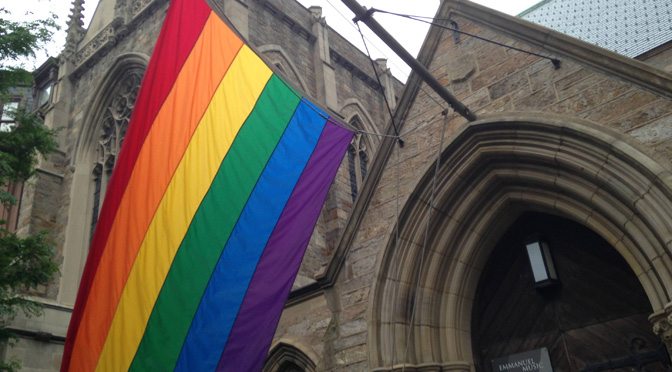 A recent email from a friend: “Sue, I’m seeing more and more ‘evangelical’ churches come out in support of gay marriage. Also, Christian friends are changing their views on the validity of the LGBT lifestyle being acceptable for a Christ-follower. I start worrying that I’m missing something, and even start questioning my beliefs.”

No, my dear friend, you are not missing something, but it is a good time to question (not doubt) your beliefs so you can be more convinced than ever that the Creator God has not changed and neither has His word.

I think there are two big reasons so many confessing believers in Christ have allowed themselves to be more shaped by the culture than by the truth of God’s word, drifting into spiritual compromise and even into apostasy (abandoning the truth of one’s faith). This is not a new problem; the apostle Paul urged his readers in Rome, “Don’t let the world around you squeeze you into its own mold, but let God re-mold your minds from within. . .” (Romans 12:2, Phillips).

Reason One: Rejecting the Authority of God’s Word

The bitter fruit of several decades of shallow preaching, teaching and discipleship is that many believers have been especially vulnerable to Satan’s deceptive question to Eve in the Garden of Eden: “Did God really say . . .?” When Christians ignore or flat-out reject the unmistakably clear biblical statements condemning homosexual relationships, they are playing into the enemy’s temptation to justify disobedience by making feelings and perceptions more important than God’s design and standards.

There are now two streams of thought on same-sex relationships and behavior, the Traditional View and the Revisionist View. The Revisionist View basically says, “It doesn’t matter what the Bible actually says, it doesn’t mean what 2000 years of church history has said it means, it means what we want it to say.”

People are redefining the Bible, gender and marriage according to what will let them do what they want, when they should (in my opinion) be asking the insightful question posed by Paul Mooris in Shadow of Sodom, “[A]m I trying to interpret Scripture in the light of my proclivity, or should I interpret my proclivity in the light of Scripture?”

Both individual Christians and churches have drifted into endorsing same-sex relationships because it always feels better to follow one’s flesh than to follow Jesus’ call to “deny yourself, take up your cross and follow Me” (Matt. 16:24).

In addition to those several decades of shallow preaching, teaching and discipleship I mentioned earlier, many believers have not been submitting themselves to the truth of the Word of God. By default, then, they were easily shaped and swayed by the six points of a brilliantly designed “Gay Manifesto” spelled out in a book called After the Ball: How America Will Conquer Its Fear and Hatred of Gays in the 90s. Originally published as an essay called “The Overhauling of Straight America” that was published in a gay magazine, the authors laid out this plan which has been executed perfectly in the United States. (The quotes below are from the essay, found here)

1. Desensitization and normalization of homosexuals in mainstream America. Talk about gays and gayness as loudly and often as possible.

“The principle behind this advice is simple: almost any behavior begins to look normal if you are exposed to enough of it at close quarters and among your acquaintances.

“In the early stages of any campaign to reach straight America, the masses should not be shocked and repelled by premature exposure to homosexual behavior itself. Instead, the imagery of sex should be downplayed and gay rights should be reduced to an abstract social question as much as possible. First let the camel get his nose inside the tent—only later his unsightly derriere!”

“In any campaign to win over the public, gays must be cast as victims in need of protection so that straights will be inclined by reflex to assume the role of protector.”

“Now, there are two different messages about the Gay Victim that are worth communicating. First, the mainstream should be told that gays are victims of fate, in the sense that most never had a choice to accept or reject their sexual preference. The message must read: ‘As far as gays can tell, they were born gay, just as you were born heterosexual or white or black or bright or athletic. Nobody ever tricked or seduced them; they never made a choice, and are not morally blameworthy. What they do isn’t willfully contrary – it’s only natural for them. This twist of fate could as easily have happened to you!'”

3. Give protectors a just cause: anti-discrimination

“Our campaign should not demand direct support for homosexual practices, should instead take anti-discrimination as its theme.”

4. The use of TV, music, film and social media to desensitize mainstream Americans to their plight as gay people

Over the past 25 years, gay characters, on TV especially, have captured the hearts of American viewers because they were attractive, funny, smart—the kind of characters viewers would like to be. No one was shown the dark underside of gay bars and bathhouses, or same-sex domestic violence, or having to get one’s HIV+ status checked.

“From Socrates to Shakespeare, from Alexander the Great to Alexander Hamilton, from Michelangelo to Walt Whitman, from Sappho to Gertrude Stein, the list is old hat to us but shocking news to heterosexual America. In no time, a skillful and clever media campaign could have the gay community looking like the veritable fairy godmother to Western Civilization.”

Use celebrities and celebrity endorsement. And who doesn’t love Ellen DeGeneres?

6. Once homosexuals have begun to gain acceptance, anti-gay opponents must be vilified, causing them to be viewed as repulsive outcasts of society.

“Our goal is here is twofold. First, we seek to replace the mainstream’s self-righteous pride about its homophobia with shame and guilt. Second, we intend to make the antigays look so nasty that average Americans will want to dissociate themselves from such types.

“The public should be shown images of ranting homophobes whose secondary traits and beliefs disgust middle America. These images might include: the Ku Klux Klan demanding that gays be burned alive or castrated; bigoted southern ministers drooling with hysterical hatred to a degree that looks both comical and deranged; menacing punks, thugs, and convicts speaking coolly about the ‘fags’ they have killed or would like to kill; a tour of Nazi concentration camps where homosexuals were tortured and gassed.”

This is how I see how we got to this place where so many people have been deceived. They didn’t anchor themselves to the Truth of the Word of God, and they opened themselves to the cultural brine of Kirk and Madsen’s plan to overhaul straight America.

I will close with three personal observations about this situation:

To my sweet friend who asked the question, let me say: God’s good gift of sex and the intimacy of the marriage relationship is still intended ONLY for one man and one woman for life. In the beginning, one (Adam) became two (when God formed Eve from Adam), and then the two became one again. That is a deep mystery that makes all variations and deviations on God’s intention wrong.

I am indebted to Hope Harris for her insight and analysis of this question.

This blog post originally appeared at blogs.bible.org/engage/sue_bohlin/why_have_so_many_christians_and_churches_become_pro-gay
on June 30, 2015.