My husband and I recently took an Alaskan cruise. As we settled ourselves for sailaway in front of large windows on one of the highest decks, I heard a little girl ask, “Did we start moving yet? How will we know when we’re moving?” I don’t know what her mother said, but I do know the answer: you fix your gaze on what isn’t moving. 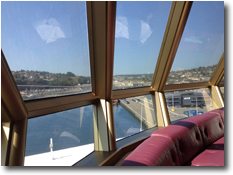 I was looking at the building in this picture I took; when the ship starting pushing away from the pier, I knew we were moving because of our view through the window in relation to the stationary building.

And I thought, “Little one, the answer to your question is wisdom for life as well. Stay focused on what is unmovable, unchangeable, what is true for all times and all people in all places. Then you will be able to respond wisely to what moves and changes in your life and in the world.”

This is true in both the small things and the world-shaking immense ones. Ray and I have been away from home for two and a half weeks, on an itinerary that has meant a lot of shifting and changing locations, unpacking suitcases one week and trying to live out of them the next. We remind ourselves that the inconvenience is temporary because, Lord willing, we’ll be home soon. That is a small, small thing made easier by remaining aware that “this too shall pass,” that the comforting security of home and routine is right around the corner. But on the other end of the scale there are also horrible, horrible things happening in our world, particularly the explosion of Islamic terrorism in Iraq, persecuting Christians who are losing everything up to and including their earthly lives. West Africa is seriously shaken by an Ebola outbreak that is causing instability in everything. If that’s not enough examples for you, Lael Arrington recently blogged here about “Five Ways to Dispel Dread.”

It can feel like the world is wobbling on its axis. Even our own little worlds. It is crucial to keep our eyes on the One who says, “I the Lord do not change” (Malachi 3:6), on the One who promises, “I will never leave you or forsake you” (Joshua 1:5). We need to stay focused on the unchanging Word of God, in which He reveals that He knows how the future will unfold, and has everything under control-even the end-times horrors that appear to be right around the corner.

Later on our cruise, as we were sailing from one port to another, I knew we were moving-apart from feeling it-because I could see the churned-up wake next to the ship. But in order to tell how much we were rolling from side to side, I focused on the horizon which appeared to rise and fall. But since I knew it was unmovable, that meant the rising and falling was happening on the ship. I sat looking out the window, gazing at the horizon that reminded me of God’s unchangeableness. A good and loving God is always, always in control. I am so glad.

This blog post originally appeared at blogs.bible.org/engage/sue_bohlin/focus_on_whats_fixed on August 12, 2014.