This Father’s Day weekend, my to-do list included personalizing almost three dozen wooden swords. A dear friend has a wonderful boys’ summer camp called “Warrior Week” where men sow love and truth (along with a fair share of messy fun) into the souls of boys. I am privileged to use my calligraphy experience to letter each boy’s name and a prayed-over character trait that is a blessing for each boy concluding his last year of Warrior Week. So I lettered blessings like “Justin the Magnanimous” and “David the Faithful” and “Cooper the Strong,” under which was lettered “Dangerous for Good.” 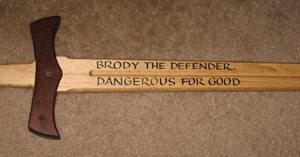 The camp leaders asked each boy’s father to write a letter affirming his son, in his own handwriting, and walked them through what to say. Affirmation is a mystery for many dads, who never received it from their own fathers. “You can say whatever encouraging words you’d like to in your letter,” the dads were told, “but we would like for you to at least include these four points:

Wow. This is powerful stuff! I rejoice in the power of a father’s words of affirmation because I have seen firsthand what a difference it makes in the lives of our sons. For all our gifts and strengths, women cannot imprint masculinity on the souls of boys and men. We can confirm what we see, but we can’t put it there. And a father’s voice, whether spoken or verbal, can have a “weight of glory,” to use C.S. Lewis’ term, that lasts for an eternity.

While I’m thrilled for the boys who will be receiving this amazing blessing, I am also reveling in the truth that my heavenly Father delights to affirm each of us. He says, “I love you, I delight in you, I am for you, and I know the plans I have for your life!”

This blog post originally appeared at blogs.bible.org/engage/sue_bohlin/swords_of_blessing on June 23, 2009