When Ray and I visited the Galapagos Islands, one of my favorite pictures was the two of us with a gigantic tortoise. Unfortunately, my big ol’ red purse was on the ground in the picture too. So I photoshopped it out. 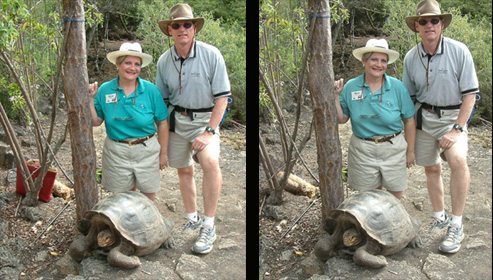 At our son’s wedding, one of the ushers wasn’t wearing his boutonniere when it was time for the formal pictures. “Not to worry,” the photographer said. “We can photoshop it in later.”

During my daughter-in-law’s holiday family picture taking, someone suggested photoshopping in a beloved uncle, since they were missing him. “No! He’s been dead for two years!” someone else responded. “You don’t photoshop in a dead person who couldn’t have been here with us!”

We just had fiber-optic TV and internet installed. We can now pause and rewind live TV. Whoa.

The ability to manipulate digital images and sounds has spoiled us, I’m afraid, into thinking we should be able to manipulate the rest of life. It’s a technologically enhanced update of the enemy’s lies in the garden, enticing Eve to think she and Adam were entitled to be like God, a thinly veiled offer to make themselves as gods, just as he had.

And so we end up with people redefining things like marriage to include any two people, including those of the same sex. And a couple of gay men who successfully got both their names put on the birth certificate of their adopted son. This is the fruit of people redefining truth and reality according to their whims and desires.

And it is so much more serious than subtracting a purse or adding a flower.

This blog post originally appeared at blogs.bible.org/engage/sue_bohlin/photoshopping_life
on January 6, 2009.