I don’t know about you, but the continuing news stream (March 15, 2011) of devastation in Japan just breaks my heart. The compassion of even the most tender-hearted person in the world, I believe, is just a drop in the bucket compared to the infinitely huge compassion of our God. He weeps over the death and destruction unleashed by the effects of sin in a fallen world. I cannot imagine the sound or the size of the tears of God.

But I think Jesus invites us to take His yoke upon us (Matthew 11:29) and co-labor with Him in intercessory prayer. How can we pray for such an unspeakable tragedy?

I think we can pray on a scale big and small. “Oh God, help Japan and the Japanese people” seems like such a pitifully inadequate prayer—and in our own puny human strength, it is. But the Word tells us that “the Spirit also helps our weakness; for we do not know how to pray as we should, but the Spirit Himself intercedes for us with groanings too deep for words” (Romans 8:26). We can trust the Holy Spirit to translate our inadequate, too-small prayers into the language of God. We can rely on Him to be faithful to His promise.

But then, we can also pray with the newspaper (or website) in hand, guided to pray for specific people highlighted in the news. I keep thinking about the man rescued on the rooftop of his house two days after the tsunami and almost ten miles out to sea. I think about how Jesus was with him on his roof as the house floated away from land, and when his wife slipped into the water. I pray for him, that he would be granted grace to sense Jesus’ presence and comfort, and turn to Him in faith. 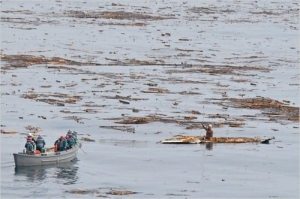 I pray for the people named in the Dallas Morning News stories, that they would not rest with the fact that their lives were spared, until they come to Jesus in faith. I pray for the spiritual cataracts that would keep them blind to His reality to fall from their eyes so they can see the truth:  God loves them personally and passionately, and saved them from death for a reason.

I pray for the people not named, but mentioned: those searching for bodies. The survivors of lost loved ones. The officials responsible for cremating an unrealistic number of bodies. Those trying to restore water and electricity. The workers in the nuclear power plants who knowingly expose themselves to the risk of deadly levels of radiation. Those securing and those passing out food. Those plagued by nightmares that don’t go away, and those who will help the traumatized process their terror.  All of them need God’s help and grace. Their ancestors will not help them. False gods will not help them. Only the true God is there for them.

And so I pray for the Christ-followers and the churches in Japan, few though they be, to shine in this time of breathtaking need, to be “Jesus with skin on” in this crisis.

Lord, have mercy. Lord, show up in Japan in a way never before seen.

And Lord, what would You have ME do?