I just finished another novel by one of my favorite authors, David Gregory. I really enjoyed The Last Christian for several reasons, including the creation of characters I truly cared about, but there are two big reasons that I find myself continuing to think about. 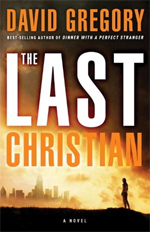 The book is set in 2088. Abby Caldwell, who grew up as the daughter of missionaries in Papua New Guinea in a tribe cut off from the rest of the world, comes back to the U.S. and learns that Christianity has died out. She is “the last Christian.” Her grandparents had left her a message sixteen years before telling her that God had impressed on both of them that she was His choice to bring Christianity back to this country, but because she had no contact with the outside world, she hadn’t received it. At the same time as Abby’s entry to American culture (quite a shock for someone who grew up in a primitive jungle culture), stories start popping up on “the Grid” about people having dreams of Jesus.

One reason the book was compelling is its explanation of how Christianity died out. One of the main characters is a history professor at a Dallas university who gives a five-point lecture about what rendered Christianity so irrelevant and obsolete as to have no presence in the culture at all. The biggest point was the lack of distinctiveness between believers and unbelievers. Since professing Christians had the same beliefs and the same behaviors of those with no allegiance to Christ, there was no reason for anyone to become a Christian.

And that’s where we are today in 2011: in an excruciatingly dangerous position of losing our Christian voice in the culture because in the majority of our lives, Jesus Christ makes absolutely no difference at all. At Probe Ministries, we call this being “culturally captive.” When our beliefs and behaviors are informed and shaped more by the surrounding culture than by the Word of God and the character of God, we have been taken captive. Paul warned the first-century Christians about this very thing: “See to it that no one takes you captive through philosophy and empty deception, according to the tradition of men, according to the elementary principles of the world, rather than according to Christ” (Colossians 2:8). The Last Christian paints a chilling scenario of what could happen right here in the United States, just as the light has gone out in Europe (except for small pockets of believers—God is still faithful!).

The other thing I really loved about the book is the heroine’s progression of understanding of her faith. When she arrives in the U.S., convinced God wants her to share the gospel with her home country, she defines it as “we are sinners and Jesus died to pay the penalty for our sin so we can go to heaven when we die.” Naturally, this message does not resonate with a completely secular audience. The author uses marvelous means to enlighten her to the much larger, far more compelling description of the gospel as the truly good news that God invites us into His life, a quality of abundance and joy and love today that is so much bigger than simply having one’s ticket-to-heaven card punched.

For the past year, reading through all four gospels, I’ve been meditating a lot on what Jesus preached: the Kingdom of God, which He sometimes also called the Kingdom of Heaven. The Kingdom is a party! Do a word search for “kingdom” in the New Testament, and you’ll see it connected with words like righteousness, peace, joy, power, treasure, fine pearls, fruit, and eating and drinking at God’s table. Sounds like a party to me! In John’s gospel, Jesus refers to the kingdom as “life.” Over and over and over again.

If people saw the Christian life as being connected to the source of life—Jesus our Lord—and saw Christians living lives marked by peace, joy, power, treasure, fruitfulness, and a radiant quality of life that comes from letting Jesus shine through us in His beauty and power, we wouldn’t need to fear that the horrible scenario painted in The Last Christian will come to pass.

This blog post originally appeared at
blogs.bible.org/engage/sue_bohlin/the_last_christian
on Jan. 18, 2011.