My husband Ray knew something was wrong as soon as he got out of bed. 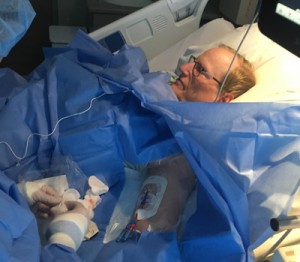 His lower back, where he’d had back surgery six weeks before, was wet. His t-shirt was wet. The sheet was wet. His fingers glistening with a strange wetness from reaching back to investigate, he asked me to check what was going on. I saw a rivulet of fluid pouring out of the top of his surgical incision. Something was really, really wrong.

As I gently pressed the skin around the incision, pus kept flowing out. He had a serious infection under the incision. It had been hidden, but it literally rose to the surface of his body and forced its way out. His problem wasn’t that pus was being discharged from the inside to the outside—that was just the symptom, the manifestation of the true problem: a deep and serious infection.

He’d had the infection before he was forced to be aware of it. There were indications: fever, and just not feeling right.

The Lord is quite adept at using the physical to show us truths about the spiritual and emotional. I started seeing parallels between the two worlds.

The undealt-with, unhealed spiritual and emotional hurts in our souls don’t just sit there under the surface—our awareness—forever. It’s like emotional pus. Eventually it starts leaking out sideways: addictions, anger, isolation, rebellion, self-destruction. These are the presenting problems that drive people to seek help through recovery programs such as Re:generation and Celebrate Recovery, or counseling.

Just as a rivulet of pus wasn’t Ray’s true problem but merely a symptom, our heart issues are the true problem that Jesus wants to point to and say, “Let Me heal them. You can’t do it on your own.”

Ray’s infection was so large that he needed “wash out” surgery. He needed a skilled surgeon, in the sterile, controlled environment of the operating room, to open up his incision and clean out the infection. Before he even got to the OR, the doctor ordered IV antibiotics to attack and disarm the destructive power of the multiplying bacteria. By the time the surgeon got to the washing-out stage, Ray’s infection had been disarmed, turned into “clean gunk.” No bacteria was left, just the debris of the now-dead bacteria.

In the spiritual realm, it’s truth that functions like powerful antibiotics. Truth attacks the destructive power of lies and decision. There is still leftover debris of lies—bad thinking habits and bad behavior habits—but when the lies are disarmed, it’s a lot easier to replace the old habits with new, healthy, godly habits.

This was a serious infection. The day after surgery, they put in a PICC line that threaded a tube from his upper arm into a vein, ending just above his heart. This is a very effective way to infuse health-building antibiotics into his body, medicine that can’t be taken orally—it has to be pumped directly into his bloodstream. He gets five antibiotic infusions a day, which we can do at home instead of needing to be hospitalized or having to go a doctor’s office (which would be hard to do at 6 a.m. and 9 p.m.!).

The PICC line allows us to keep a constant level of antibiotic in his blood. He needs this constant flow to attack the infection over a long period of time. We also need a constant infusion of truth into our souls, into our minds, to counteract the destructive power of lies and deceptions and schemes. In fact, one study revealed the it takes a minimum of four infusions of truth weekly through time in the Word for spiritual growth and healthiness.

I like thinking about the infusion of truth through God’s Word as I connect the tubing to Ray’s PICC line catheter. God is so good to give us physical lessons to show us spiritual truths!

But that would have also shut down the healing.

When we have soul sickness—a heart infection, if you will—we need to entrust ourselves into the hands of people more educated in the healing process than we are. We need to surrender our false sense of control and invite others to lead us from sickness into health. And we need to not shut down the process by thinking we know better, or thinking we’re fixed or even just “good enough.” We need to not push back against restrictions suggested by those who know better than we do what it will take to help us climb of our pits to get to the place of spiritual and emotional health.

This blog post originally appeared at
https://blogs.bible.org/engage/sue_bohlin/back_infections_and_heart_infections
on Sept. 4, 2019.