Digging Our Own Grave: The Secular Captivity of the Church

Home Digging Our Own Grave: The Secular Captivity of the Church

Rick Wade provides an overview of how the Christian church has become captive to the godless values and perspective of the surrounding culture, based on Os Guinness’ book The Last Christian on Earth.

If memory serves me correctly, it was my introduction to such concepts as secularization and pluralization. I’m speaking of the book The Gravedigger Files written by Os Guinness in the early 1980s. The subtitle of The Gravedigger Files is Papers on the Subversion of the Modern Church. The book is a fictional dialogue between two members of a council which has as its purpose the undermining of the Christian church. The Deputy Director of the Central Security Council gives one of his subordinates advice on how to accomplish their goal in his area.

In 2010, Guinness published a revised and updated version of Gravedigger Files. He gave it the new title The Last Christian on Earth. The titled was inspired in part by Luke 18:8: “When the Son of Man comes, will he find faith on the earth?” 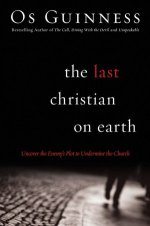 What Guinness wanted to do in Gravedigger and the updated version was to show how the church in America is being undermined from within. We concern ourselves so much about outside enemies without realizing that we are at times our own worst enemies. He wrote: “The Christian faith contributed decisively to the rise of the modern world, but it has been undermined decisively by the modern world it helped to create. The Christian faith has become its own gravedigger.”{1}

The primary focus of Probe Ministries now is what’s been called the cultural captivity of the church. All too many of us are influenced more by our culture than by the Bible. It’s impossible to separate oneself from one’s surrounding culture, to be sure, but when there is conflict, we are called to follow Christ. Cultural captivity is subtle. It slowly creeps up on us, and, before we know it, it has soaked into our pores and infected much of what we think and do. “Subversion works best when the process is slow and subtle,” Guinness’s Deputy Director says. “Subtle compromise is always better than sudden captivity.”{2}

This book is helpful for seeing ourselves in a clearer light, and for understanding why some of the things we do, which seem so harmless, are really very harmful to our own Christian lives and to the church.

Rather than directly attacking the church, the enemy finds it more profitable to try to undermine it. “Subversion” is the word Os Guinness’s Deputy Director uses in the book The Last Christian on Earth. How does this happen?

This process of undermining comes in various stages. Three of them are demoralization, subversion, and defection.{3}

Demoralization is the softening up of the church through such things as hypocrisy and public scandals. Morale drops, and our ability to resist the devil’s advances decreases.

Subversion comes about from winning over key church leaders who begin to trumpet “radical” and “daring” ideas (better words for this, Guinness says, may be “revisionist” and “unfaithful”{4}).

Defection comes when prominent members abandon the church, such as when former fundamentalists publicly deny the divine authority of the Bible.

Faithfulness, which once was understood as being committed to God, now has a new focus. The desire to be “in the world but not of the world” is realigned. The church’s commitment to the world turns into attachment, and worldliness settles in. “Worldliness” is a term once used by fundamentalists to describe being too attached to the world, but it went out of favor because of the excesses of separationism. It was a word to be snickered at by evangelicals who were adept—or thought they were adept—at being in the world without becoming its servant. This snickering, however, doesn’t hide the fact that the evangelical sub-culture exhibits a significant degree of being of the world, or worldly.

Moving through these stages, the Deputy Director says, has led the church deeper and deeper into cultural captivity. The church becomes so identified with the culture that it no longer can act independently of it. Then it finds itself living with the consequences of its choices. Says the Deputy Director, “Our supreme prize at this level is the complete devastation of the Church by getting the Adversary [or God] to judge her himself. “Here, in a stroke,” he continues, “is the beauty of subversion through worldliness and its infinite superiority to persecution. . . . if the Adversary is to judge his own people, who are we to complain?”{5}

In The Last Christian, Os Guinness describes three challenges of modernity which aid in the subversion of the church. They are secularization, privatization, and pluralization. These forces work to squeeze us into the mold of modernistic culture. To too great an extent, they have been successful.

Secularization is the process of separating religious ideas and institutions from the public sphere. Guinness’s Deputy Director speaks of society being “freed” from religious influence.{6} This is how secularists see the separation. Religion is seen as restrictive and oppressive and harmful, and the public square needs to be free of it. All ideas and beliefs are welcome as long as they aren’t explicitly grounded in religious belief. Because of the influence of the public arena in our lives, Guinness points out that “Secularization ensures that ordinary reality is not just the official reality but also the only reality. Beyond what modern people can see, touch, taste and smell is quite simply nothing that matters.”{7}

If religion is removed from the public square, the immediate result is privatization, the restriction of religion to our private worlds. This can be the small communities of our churches or it can mean our own individual lives. Guinness writes that “today, where religion still survives in the modern world, no matter how passionate or committed the believer, it amounts to little more than a private preference, a spare-time hobby, and a leisure pursuit.”{8}

The third force is pluralization. With the meeting of many cultures comes the awareness that there are many options with regard to food, dress, relationships, entertainment, religion, and other aspects of life. The number of options multiplies in all areas, “especially,” notes Guinness, “at the level of worldviews, faiths and ideologies.”{9} Choosing isn’t a simple matter anymore since it’s so widely believed that there is no truth in such matters. In fact, choosing is what counts. Guinness writes, “what matters is no longer good choice or right choice or wise choice, but simply choice.”{10}

Some Characteristics of Subversion

What are some characteristics of a subverted church? Os Guinness discusses several in his book The Last Christian on Earth.

One result of being pushed into our own private worlds by secularization is that we construct our own sub-culture and attempt to keep a distance. But then we turn around and model our sub-culture after the wider culture. For example, it’s no secret that evangelical Christianity is heavily commercialized. Our Christianity becomes our style reflected in plenty of Christian kitsch and in being surrounded by the latest in fashions. The depth of our captivity to things—even Christian-ish things—becomes a measure of the shallowness of our Christianity. Compared to what Jesus and the apostles offered, which included sacrifice and suffering, says Guinness, “today’s spiritual diet . . . is refined and processed. All the cost, sacrifice and demand are removed.”{11}

Another pitfall is rationalization, when we have to weigh and measure everything in modernistic ways. We’re guided by “measurable outcomes” and “best practices” more than by the leading of the Spirit.{12}

Feeling forced to keep our Christian lives separate from the wider culture—the sacred/secular split, it’s been called—reduces Christianity in size. We don’t know how to apply it to the larger world (apart from excursion-style evangelism). “Many Christians,” Guinness writes, “have so personal a theology and so private a morality that they lack the criteria by which to judge society from a Christian perspective.”{13} Lacking the ability to even make sound judgments about contemporary issues from a distinctly Christian perspective, we’re unable to speak in a way that commands attention. Christianity is thought at best to be “socially irrelevant, even if privately engaging,” as someone said.{14}

A Wrong Way to Respond

In the face of the pressures of the modern world on us, the conservative church has responded in varying ways in the wider culture.

Os Guinness describes what he calls the push and pull phases of public involvement by conservatives. The push phase comes when conservatives realize how much influence they have lost. For much of the nineteenth century, evangelical Christianity was dominant in public life. Over the last century that has been stripped away, and conservatives have seen what they held near and dear taken away. This loss of respect and position in our society has resulted in insecurity.{15}

In response, conservative Christians push for power by means of political action and influence in education and the mass media. “But, since the drive for power is born of social impotence rather than spiritual authority,” Guinness writes, “the final result will be compromise and disillusionment.” They fall “for the delusion of power without authority.”{16}

When they recognize the loss of purity and principles in their actions, they begin to pull back and disentangle themselves from the centers of power. There is a return to the authority of the gospel without, however, a sense of the power of the gospel. Standing on the outside, as it were, they resort to “theologies stressing prophetic detachment, not constructive involvement.”{17} This is the phase of “hypercritical separatism.”

Then comes a third phase, the enemies’ coup de grâce. Standing back to view all this, some Christians experience what Guinness’s Deputy Director gloatingly describes as “a fleeting moment when they feel so isolated in their inner judgments that they wonder if they are the last Christian left.” There is left “a residue of part self-pity, part discouragement, and part shame that unnerves the best of them.”{18} But these are the few. The many are simply kept asleep, the Director is happy to report, unaware of what has happened.

This article has given only a taste of Os Guinness’s message to us. The hope for the church is a return to the gospel in all its purity and power. I invite you to read The Last Christian on Earth and get a fuller picture of the situation and what we can do to bring about change.

Rick Wade served as a Probe research associate for 17 years. He holds a B.A. in communications (radio broadcasting) from Moody Bible Institute, an M.A. in Christian Thought (theology/philosophy of religion) from Trinity Evangelical Divinity School, and a Master of Humanities (emphasis in philosophy) from the University of Dallas. Rick's interests focus on apologetics, Christianity and culture, and the changing currents in Western thought. Before joining Probe Ministries, Rick worked in the ship repair industry in Norfolk, VA. He can be reached at rwade@pobox.com.