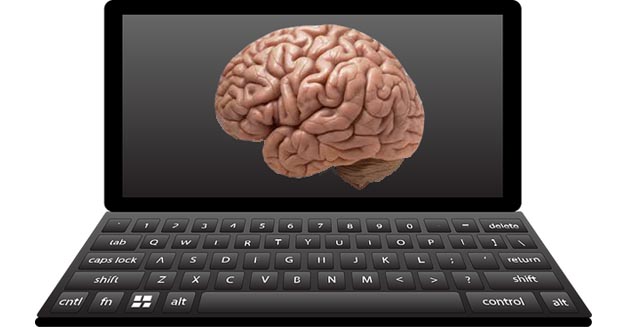 Let’s see. This morning I chose my black t-shirt, tan dress slacks, black shoes, and black socks. After gathering all my things for the trip to the office, I put on my now-famous Grand Canyon felt hat and headed out the door, deciding I didn’t need an umbrella for the short walk in the rain.

Oops! Wait a minute! According to evolutionary biologist, Jerry Coyne, I made none of those choices. Now I did do all those things, but my brain determined those “choices.” After all, my brain is just a meat computer, destined to obey the laws of physics to combine my genetic history, past environmental cues, and my latest experiences to make those decisions. “I,” meaning me as a person apart from the meat computer, don’t exist! Enter with me into the wacky world of evolutionary naturalism where all there is, is matter and energy.

Dr. Jerry Coyne is a Professor at the University of Chicago in the Department of Ecology and Evolution. In many ways he has broken political ranks with many of those seeking to improve education in evolution by actively proclaiming that evolution entails atheism. He lines up with those like Richard Dawkins, Sam Harris, and the late Christopher Hitchens. Religion is the greatest evil on the planet, they decry, and we need to dispose ourselves of all religious nonsense such as freedom of choice.

You see, our mental decisions are just chemical reactions in our brains which just happen. There is no purpose or even a choice in making our choices!

Now that I probably have you thoroughly confused, let me try to let Jerry Coyne speak for himself.

In January of last year, Coyne published a commentary in the online version of USA Today titled, “Why you don’t really have free will.”{1} He stated, “You may feel like you’ve made choices, but in reality your decision to read this piece, and whether to have eggs or pancakes, was determined long before you were aware of it—perhaps even before you woke up today. And your ‘will’ had no part in that decision. So it is with all of our other choices: not one of them results from a free and conscious decision on our part. There is no freedom of choice, no free will.”

Let me allow Coyne to speak for himself as he explains his first line of evidence, a materialistic assumption. He says,

We are biological creatures, collections of molecules that must obey the laws of physics. All the success of science rests on the regularity of those laws, which determine the behavior of every molecule in the universe. Those molecules, of course, also make up your brain — the organ that does the “choosing.” And the neurons and molecules in your brain are the product of both your genes and your environment, an environment including the other people we deal with. Memories, for example, are nothing more than structural and chemical changes in your brain cells. Everything that you think, say, or do, must come down to molecules and physics.

It may be true that science depends on the regularity of the laws of physics, but Coyne makes no defense of whether there is anything else to our minds other than chemistry. He assumes without saying so that the material brain is all there is to our mind.

In 2007 neuroscientist Mario Beauregard and journalist Denyse O’Leary published The Spiritual Brain.{2} Quoting from the dust jacket, Beauregard and O’Leary demonstrate that scientific materialism like Coyne’s “is at a loss to explain irrefutable accounts of mind over matter, of intuition, willpower, and leaps of faith, of the ‘placebo effect’ in medicine, of near death experiences on the operating table, and of psychic premonitions of loved ones in crisis.” For each of these phenomena, they provide numerous examples where people’s minds understood, observed, changed, or perceived physical realities they simply could not know about in a purely physical sense.

Jerry Coyne’s first line of evidence turns out to be an unverified materialist assumption that has plenty of physical evidence that cannot be explained on a materialist basis. So much for convincing evidence. But to his credit, Coyne proceeds to scientific evidence he says demonstrates that brain measurements indicate our “decisions” can be predicted by observing blood flow to certain areas of the brains seconds before we actually feel we have “decided.”

Does Our Brain “Decide” Before We’re Conscious of the Decision?

Coyne’s second line of evidence consists of brain experiments claiming to predict our decisions by observing blood flow in decision-making areas of our brain seconds before we are aware of our decision. Coyne says,

Recent experiments involving brain scans show that when a subject “decides” to push a button on the left or right side of a computer, the choice can be predicted by brain activity at least seven seconds before the subject is consciously aware of having made it. (These studies use crude imaging techniques based on blood flow, and I suspect that future understanding of the brain will allow us to predict many of our decisions far earlier than seven seconds in advance.) “Decisions” made like that aren’t conscious ones. And if our choices are unconscious, with some determined well before the moment we think we’ve made them, then we don’t have free will in any meaningful sense.”

This is certainly interesting research. My first reaction is to note that these are the simplest decisions we can make. Just choose left or right. No thinking involved, no consequences. What if the choice were far more substantial, such as “Should I buy this house based on my set of pros and cons of the decision?” Or what about those “split-second” decisions to avoid a collision in a vehicle or whether to stop or go when the traffic light unexpectedly turns yellow? Each of those decisions takes far less than seven seconds.

Granted, Coyne’s article is a simple commentary in an online newspaper, but I expect more solid and convincing evidence that this. Coyne leaves us with little else than his materialist assumptions as reviewed previously.

Coyne is Required to Pretend He Has Choice

I’d like to turn my attention to Coyne’s attempts to spell out our options, once we are convinced, as he is, that we really don’t make any choices.

Coyne dismisses various philosophical attempts to rescue some sort of free will. It’s clear Coyne is scornful of philosophy in general. Maybe that explains why he is such a bad philosopher. I say that because he continues by expressing that it’s impossible to just throw up our hands and despair that life is not worth living if I don’t really make choices. Coyne says:

So if we don’t have free will, what can we do? One possibility is to give in to a despairing nihilism and just stop doing anything. But that’s impossible, for our feeling of personal agency is so overwhelming that we have no choice but to pretend that we do choose, and get on with our lives. After all, everyone deals with the unpalatable fact of our mortality, and usually do so by ignoring it rather than ruminating obsessively about it.

I have to say that when your worldview requires you to pretend that reality is something other than what you perceive, your worldview clearly can’t be trusted.

This reminds me of a class back in grad school when I asked about meaning and purpose in life in the evolutionary world view. They said that as just another animal, our only purpose is to survive and reproduce. I asked again, “What difference does it make, though, when I’m dead and in the ground?” According to evolution, my existence is over. One prof responded by saying that ultimately it doesn’t really matter. So I asked, “Then why go on living, why stop at red lights, who cares?” The same professor responded by saying, “Well, in the future, those that will be selected for will be those who know there is no purpose in life, but will live as if there is.”

How Does Knowing Our Brain’s Illusions Lead to a “Kinder” World?

Towards the end of Coyne’s commentary he tries to discern what we should do with our understanding that we don’t have any free will. First, as you might suspect, he disparages religion, specifically Christianity. He concludes that, since we have no real choice, none of us can really choose Jesus or reject him. It’s all predetermined by our genetic and environmental history. So, “If we have no free choice, then such religious tenets—and the existence of a disembodied ‘soul’—are undermined, and any post-mortem fates of the faithful are determined, Calvinistically, by circumstances over which they have no control.” Well, there you have it, Reformed theology according to Jerry Coyne.

His second observation is that since we are little more than marionettes responding to the laws of physics, this should influence how we deal with criminals. We may decide for the sake of society that some need to be removed from circulation, so to speak — sent to prison for our protection. But we certainly can’t hold them responsible. According to Coyne, “What is not justified is revenge or retribution—the idea of punishing criminals for making the ‘wrong choice.’”

Lastly, Coyne says our knowledge of no free will or real choices should lead to a kinder world, presumably because revenge is outdated. “Further, by losing free will we gain empathy, for we realize that in the end all of us, whether Bernie Madoffs or Nelson Mandelas, are victims of circumstance—of the genes we’re bequeathed and the environments we encounter. With that under our belts, we can go about building a kinder world.”

Well, personally I have gained empathy for Jerry Coyne because his commentary is just a product of circumstance, so I can just ignore it.

1. Jerry Coyne, “Why you don’t really have free will,” USA Today, Jan. 1, 2012, usat.ly/WBnUBi. All Coyne’s quotations are from this commentary.
2. Mario Beauregard and Denyse O’Leary, The Spiritual Brain: A Neuroscientist’s Case for the Existence of the Soul (Harper One: New York, NY, 2007).

Raymond G. Bohlin is Vice President of Vision Outreach at Probe Ministries. He is a graduate of the University of Illinois (B.S., zoology), North Texas State University (M.S., population genetics), and the University of Texas at Dallas (M.S., Ph.D., molecular biology). He is the co-author of the book The Natural Limits to Biological Change, served as general editor of Creation, Evolution and Modern Science, co-author of Basic Questions on Genetics, Stem Cell Research and Cloning (The BioBasics Series), and has published numerous journal articles. Dr. Bohlin was named a Research Fellow of the Discovery Institute's Center for the Renewal of Science and Culture in 1997, 2000 and 2012.