Was Darwin a Racist?

Home Was Darwin a Racist?

In some circles to even ask this question and impugn Darwin’s integrity conjures up charges of secular blasphemy. After all, Darwin is well documented as holding views on slavery commensurate with the great William Wilberforce himself. Darwin was repulsed by any cruelty of humans on humans.

Darwin was by all accounts an affectionate husband, loving father, defender of the oppressed, and just an all round good and decent man. So how could one accuse him of racism? You simply need to read his second major work on evolution, The Descent of Man.

As Benjamin Wiker makes clear in his recent biographical book, The Darwin Myth: The Life and Lies of Charles Darwin, Darwin insisted that his theory of natural selection and evolution be understood as a purely natural and undirected process. Consequently, he could only see humans and apes as the result of a real struggle for survival. By all accounts, humans were winning. There was also a severe struggle going on between the races of man. 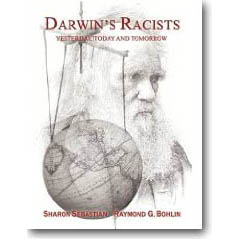 I recently coauthored a book with Sharon Sebastian entitled Darwin’s Racists: Yesterday, Today, and Tomorrow. In chapter three we discuss Darwin’s explanation of the differences between men and apes from The Descent of Man.

In Chapter 6, On the Affinities and Genealogy of Man, Darwin argues that he expected the civilized races of men to fully exterminate the savage races of men in just a few centuries. He also expected the anthropomorphous apes [Ed. note: those most like humans] (gorillas and chimpanzees) to become extinct. As a result, he believed that the gap between humans and animals would eventually be much greater than exists. Darwin postulated that this higher form of man would come from the current Caucasian race. In his book, Darwin states that the current gap between apes and humans is between the gorilla, on the ape side, and the Negro or Australian aborigine, on the human side:

The break will then be rendered wider, for it will intervene between man in a more civilized state, as we may hope, than the Caucasian, and some ape as low as a baboon, instead of as present between the Negro or Australian and the gorilla.

Darwin’s foremost German disciple, Ernst Haeckel, made even more dramatic statements. According to Haeckel, if you want to draw a sharp boundary between the human races and the apes, “you must draw it between the most highly developed civilized people on the one hand and the crudest primitive people on the other, and unite the latter with the apes.” Elsewhere Haeckel identifies these cruder and primitive races as the Australian aborigines and the South African Bushmen, which he says, still live in herds, climb trees and eat fruit. According to Haeckel, certain more primitive groups of “people” are more ape than human.

Darwin certainly did not invent racism. Prejudice because someone is “other” than us has always been a part of human existence. What Darwin did provide was a scientific rationale that justified racial prejudice. Implicit in Darwin’s struggle for existence is that some forms of a species would be more fit for the current environment than others. From Darwin’s vantage point, the Caucasian or European race was well underway to surpassing the other “human” races because of their intelligence, culture, and superiority in war as demonstrated routinely in conflicts between Europeans and any other race or culture to that point.

Darwin’s ideas were used to launch the first eugenics society in Britain headed by his cousin, Francis Galton. Darwin’s son, Leonard, later served as President of the same society. Margaret Sanger drew her inspiration for what became Planned Parenthood from Darwin and saw a need to control the breeding of poorer and less fit humans.

If humans are a part of a naturalistic struggle for existence, then it logically follows that some tribes and races of humans will be more fit than others. And since with Darwin’s help, we now understand this struggle, why not help it along by slowing down the breeding of those less fit? Or, as Hitler rationalized, eliminate them altogether.

To be sure, Darwin himself would likely have been horrified by the excesses of the early 20th century eugenics societies and the national excesses of Nazi Germany, Stalinist Russia, Mao’s Cultural Revolution and Pol Pot’s regime of extermination. But they all thought they were simply aiding and abetting the process of natural selection.

You can order a copy of the book at the Probe Online Store.

Raymond G. Bohlin is Vice President of Vision Outreach at Probe Ministries. He is a graduate of the University of Illinois (B.S., zoology), North Texas State University (M.S., population genetics), and the University of Texas at Dallas (M.S., Ph.D., molecular biology). He is the co-author of the book The Natural Limits to Biological Change, served as general editor of Creation, Evolution and Modern Science, co-author of Basic Questions on Genetics, Stem Cell Research and Cloning (The BioBasics Series), and has published numerous journal articles. Dr. Bohlin was named a Research Fellow of the Discovery Institute's Center for the Renewal of Science and Culture in 1997, 2000 and 2012.